Taking a stand on diversity 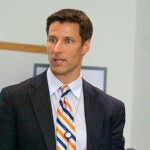 As the U.S. Supreme Court prepares to hear its first major affirmative action case since 2003, Harvard University, in partnership with 13 other universities, filed a brief last night defending the use of race-conscious admissions policies.

In October, the high court will consider arguments in Fisher v. the University of Texas at Austin, a case that questions whether that state’s use of race in its admissions decisions violates the equal protection clause of the 14th Amendment. The case was brought before the court on behalf of Abigail Fisher, a white student who was rejected from UT Austin in 2008. Fisher’s lawyers contend that despite her strong academic record, she was denied admission in favor of minority applicants, a decision they call unconstitutional.

Harvard has no direct involvement in the case, but the University joined the amicus curiae, or “friend of the court,” brief to bolster the argument for Texas’ admissions process, which considers applicants’ race among other factors.

“A diverse student body is fundamental to the educational experience at Harvard,” President Drew Faust said. “Bringing together students from different backgrounds and walks of life challenges students to think in different ways about themselves, their beliefs, and the world into which they will graduate.”

The 39-page brief urges the court to “emphatically reaffirm” its previous position in Grutter v. Bollinger, the 2003 decision in which the high court declared that the government has a compelling interest in promoting diversity and that universities are not required to maintain strictly race-neutral admissions policies. The brief argues that universities’ ability to make admissions judgments using “a highly individualized, holistic review process” developed over decades is fundamental to academic freedom.

The signatories “all recognized long ago that admissions by purely numerical factors such as grade-point averages and standardized test scores would not effectively accomplish their broader educational missions,” it states.

“With this brief, a broad cross-section of the nation’s leading universities are speaking with a single voice on a topic of vital importance to institutions of higher education,” said Robert Iuliano, vice president and general counsel of Harvard. “What we are saying is that a diverse student body improves the quality of education and helps our graduates become more effective citizens and leaders in an increasingly diverse nation and world.”