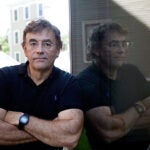 She sees crops easing world hunger after being enhanced with the genes of extreme bacteria that give plants a second way to convert sunlight into biomass.

She sees a future where the cells of astronauts remember if they’ve been damaged by gamma rays, alerting doctors before cancer starts to grow.

Silver, a leader in the relatively new field of synthetic biology, is working toward that future, running multiple projects in two labs that employ nearly two dozen fellows, graduate students, undergraduates, and staff.

To Silver, who traces the discipline’s roots to a meeting at the Massachusetts Institute of Technology  (MIT) a decade ago at which she was the only molecular biologist, synthetic biology seeks to take the trial and error out of biological engineering by creating biological elements whose properties are known and can fit together in predictable ways to build useful systems.

“They posed the question [at the meeting], ‘Why can’t biology be faster, more predictable, and easier to engineer?’ For me, that was the foundation of synthetic biology,” Silver said.

One view of synthetic biologists is that biology — despite its astonishing complexity — is essentially modular. Understood well enough, its building blocks — organs, cells, genes, proteins — could be assembled in plug-and-play fashion, like electrical elements on a circuit board.

With such an approach, a scientist interested in the output of the whole system wouldn’t have to master the detailed biology of an element, he or she would just have to know how it fits into the whole circuit.

“I’ve always thought that biology is quite modular,” Silver said. “Biological parts … have defined properties such that you can put them together and build logical circuits inside cells to get cells to do useful things.”

Though some argue that the circuit board analogy is flawed — biological parts aren’t hard-wired to one another, after all — few dispute the benefit of creating units whose behavior and interaction are predictable, of having biological parts from which one can create new fuels, drugs, and a host of other things.

Researchers are taking at least three major approaches to achieve that predictability, Silver said. One is to understand the properties of biological units so well that they can be plugged into a computer, allowing scientists to use computer-aided design (CAD) to create and optimize biological systems that do specific tasks, such as producing a vaccine for a new disease.

A second approach is to use high-throughput screening to quickly examine many different options — microbes carrying particular genes or entire synthetic chromosomes, for example — to find the one best suited to a particular task.

A third approach, one popular in labs today, is to let evolution contribute to the work. In Silver’s lab, for example, researchers try to engineer bacteria to use carbon dioxide to create organic compounds. This process, called carbon fixation, is normally only performed by photosynthetic organisms. Silver’s engineered E. coli do the trick, but they aren’t very good at it, so researchers grow the bacteria in conditions that favor those that fixed carbon and let evolution do the rest.

“We start with a synthetic system, and then let evolution take over to make it better,” Silver said. “That’s the advantage of using life [instead of] a computer chip.”

“The beauty of cheap sequencing is it’s going to change how we do genetics,” Silver said. “We can evolve a system to make it better and then … see what mutations made it better. If you can march through and find those sequences faster, you can use synthetic biology to get your organism to do what you want. That’s the vision.”

Silver’s vision is shared by others at Harvard and in the Boston area. The laboratory of HMS Professor George Church, Harvard’s Wyss Institute for Biologically Inspired Engineering, and labs at Boston University and MIT, which has its own Synthetic Biology Center, are all part of the region’s synthetic biology hub.

If the field lives up to its promise, Silver said, cheap, fast genetic sequencing will allow scientists to isolate important functional genes, put them in bacteria engineered to produce and excrete drugs, and then collect the desired product, all for a fraction of the cost of an analogous process today.

She used the example of the recent development of a known drug for malaria from the wormwood plant, financed by a starter grant of $40 million and then augmented with additional funding. The result was a drug produced by microbes genetically engineered with key genes and regulatory circuits. Though effective, the effort consumed a lot of time and resources, a problem that synthetic biology could ease.

Silver’s lab is engaged in a variety of projects, working with E. coli bacteria, photosynthetic cyanobacteria, plants, and even the immune system. She’s working on bacterial batteries, microbes that make biofuels, and last year made initial steps toward a photosynthetic fish. She receives funding from the Defense Department’s DARPA program and the Energy Department’s ARPA-E program.

Though synthetic biology works on a variety of scales, much attention is focused on microbes, which can be manipulated genetically and grown by the millions in the lab. Cyanobacteria, powered through photosynthesis, hold extra attraction because they’re solar-powered.

Danny Ducat, a postdoctoral fellow with an interest in the environment, has transformed these bacteria into microscopic sugar factories and is now exploring how to foster symbiosis with alcohol-producing yeast cells. If he can get the two organisms to thrive together, he will have created a mini biofuels factory, with the cyanobacteria producing sugar that the yeast then use to create ethanol, which can be used as a fuel.

Cyanobacteria are naturally photosynthetic, but normally hold onto the sugars they create. The first step was to add the genes that produced cellular transporter molecules that would shepherd the sugar across the cell membrane, releasing it outside the bacteria. Ducat developed a strain that secretes 80 percent of the sugar it produces — sugar from the sun, in essence — and is now working to pair it with yeast that grows in the same conditions as the cyanobacteria.

The creation of microbial biofuel factories could answer some of the problems facing biofuels today. Biofuel production, which uses corn and sugar cane as feedstock, diverts potential food crops and causes food prices to fluctuate. Some question not just biofuels’ economic impact, but also the morality of using food to make fuel in a world where there are people who go to bed hungry every night.

A microbial biofuels factory, however, could be built on marginal land, leaving arable land free to grow food, Ducat said. But that factory is still a long way off. Even if researchers succeed in getting the yeast and cyanobacteria to work together, the system would still have to be scaled up to industrial size.

“The scale-up is really the big bottleneck in a lot of these projects,” Ducat said. “It’s not a trivial engineering issue.”

Genetic engineers have long faced criticism that they’re tampering with nature. Silver counters that even some of our most entrenched public health strategies, like taking vaccines to fight disease, are at heart “messing with nature.” Still, a focus of Silver’s lab is creating genetic self-destruct traits, termed “auto-delete,” as a way to ensure that genetically modified organisms don’t escape into the environment.

Silver has helped organize annual conferences that bring together synthetic biologists to discuss developments in the field, and which also engage specialists in public policy, ethics, and other fields related to the social issues raised by the science.

The field is on the verge of an explosion in both what scientists can do and in what the public — including governments and business — understands is possible, she said.

“There’s a huge interest in many circles about what biology has to offer.”