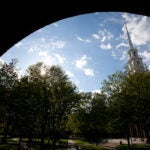 Taking a stand on diversity

A new study on the impact of school vouchers on college enrollments shows that the percentage of African-American students who enrolled part time or full time in college by 2011 was 24 percent higher for those who had won a school voucher lottery and used their voucher to attend a private school.

The experimental study, conducted by researchers at Harvard University and the Brookings Institution, compared two groups of students: a group that entered private schools with the help of a voucher program in New York City in 1997, and a control group that did not win vouchers. The attrition rate from the study over a 14-year period was less than 1 percent, making it highly unlikely that attrition from the study biased the findings. The study is available online.

Matthew M. Chingos of the Brookings Institution and Paul E. Peterson, director of Harvard’s Program on Education Policy and Governance, tracked students entering grades K-five who participated in a foundation-funded New York City voucher experiment begun in 1997 until they were at least 21 years of age as of the fall of 2011. The researchers found that among African-Americans, only 26 percent attended college full time within three years of expected high school graduation if they did not receive the voucher opportunity. Among those who received the voucher, 34 percent attended college full time within three years, or an increase of about 31 percent.

In contrast to those results, Chingos and Peterson found only a small, statistically insignificant impact on the college enrollment decision of Hispanic students. The numbers of white and Asian students participating in the school voucher program were too few to permit separate analysis. When all students are combined together, no overall impacts can be detected.

Peterson surmised that the difference between the results for African-American and Hispanic students could be due in part to the greater educational needs faced by African-American students.

The authors also found that the voucher offer had a larger impact on school quality (as reported by parents) among African-Americans than among Hispanic families.

“The impacts on the college enrollment decisions of African-American students is striking, given the modest costs of the intervention, which came to a total of only $4,200 per pupil over a three-year period,” Chingos said. “A class size reduction intervention in Tennessee that had a similar impact cost $12,000 per pupil,” he added.

The authors also said that religious considerations may have played a greater role in the choice of a school by Hispanic families than African-American ones, as Hispanics are more likely to be Catholic, the same religious affiliation as that of the majority of private schools in New York City. African-American students were especially at risk of not going on to college, note the authors, “and families sought a private school — even one outside their religious tradition — that would help their child overcome that disadvantage.”