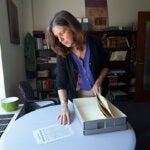 Guides to the gallows

Nieman journalists tell their stories through other tools

For one new fellow at the Nieman Foundation for Journalism at Harvard, images are the way he tells a compelling story. For another fellow, the way to convey it is through data.

The foundation recently welcomed 24 fellows to campus for 2012-13. Among them are Finbarr O’Reilly, Reuters chief photographer for west and central Africa, and Laura Norton Amico, founder and editor of Homicide Watch, a website for data-driven coverage of violent crime in Washington, D.C.

Originally from Ireland, O’Reilly grew up in Canada and has covered Africa for the past decade, based out of Senegal since 2005. Initially, on graduating from the University of British Columbia in 1992, he decided to backpack around the world.

“I spent a year in Africa and wound up in Rwanda in 1994, just as the genocide was unfolding there,” O’Reilly said. “I also was in South Africa when Nelson Mandela was voted in for president. I was reading the news reports of those events — the worst of what people can do to each other in Rwanda, and the most optimistic and hopeful outcome that you could imagine in South Africa — and it made me really interested in what was happening and the storytelling process involved in that. Some reports reflected what I was experiencing on the ground. But others weren’t, and I felt that I had something to say about this that I wanted to share.”

O’Reilly’s transition to photography was driven by a desire to increase awareness of events in Africa. “I was often traveling on my own and didn’t have a photographer with me, and I started to realize that the complicated stories from Congo or Darfur didn’t always get the international attention that I thought they deserved,” he said. “But as I started shifting to photography, those stories were being published much more widely and having much more impact. Photography really is your view. It’s your perspective of the world, your take on a situation or event. So in a sense, you have much more of a voice than you do as a writer. I still write, but my hope is that if the picture is strong enough, people will read more about the story you’re trying to cover.”

Just three months after starting work as a full-time photographer, O’Reilly took a photo of the fingers of a malnourished child pressed against the lips of his mother in northwestern Niger. The image eventually won the 2006 World Press Photo of the Year award. “I felt like a bit of a fraud, I have to say,” O’Reilly admitted. “But my response was … they’d given me this honor; now I really needed to earn it and justify it.”

Having covered conflict zones in Africa, Afghanistan, Iraq, and Libya, O’Reilly applied to become a Nieman Fellow to understand the impact that reporting such conflicts can have on individuals. “I’m interested in how journalists who cover conflict are affected by trauma — how they cope and deal with it,” he said. “It will help me understand my own motives for covering things and how to relate to people who have been through those traumatic experiences, as well as my colleagues. I’m open to all the experiences available here. I’m sure it will be a lot more than I can imagine.”

Launched in 2010, the site covers every homicide from crime to conviction, and was recognized as a notable entry in the 2011 Knight-Batten Awards for Innovation in Journalism. The site declares: “As D.C. residents, we believe that how people live and die here, and how those deaths are recognized, matter to every one of us. If it matters how someone is killed in Cleveland Park, then it matters how someone is killed in Truxton Circle, Ivy City, Washington Highlands, or Georgetown.”

Originally from California, Amico said that the lure of telling people’s stories drew her to journalism and eventually prompted the Homicide Watch site. “I fell in love with crime reporting,” she said. “It captured the drama and significance that I felt was really important to good storytelling. I also found it very difficult to find information on homicides in my area, and the site grew out of that.

“We realized that people who were using the site were primarily coming in on people’s names,” Amico said. “They were searching names on the Internet and landing at Homicide Watch based on that search. We realized that people were seeking out information on people they knew, partly because they were caught up in these very dramatic circumstances. As a result, we opened up as much of the database as we can.”

Homicide Watch initially examined events happening in Amico’s neighborhood, but now the site, which she runs with her husband, Chris, has extended that option to the Washington community. “One of the things I find interesting about Homicide Watch is that we really opened up a forum for people to tell their own stories,” Amico said. “By virtue of it being online, and the way we organize the information, people can not only access the information, but add to it as well.”

During her fellowship, Amico will explore ways to move criminal justice reporting online. “A lot of what we see news organizations doing is just putting stories online,” she said. “On a crime beat, as I’ve learned, that model doesn’t work. I’m interested in looking at how newspapers can better deal with that problem. The other thing I’m considering is what a database-driven-structure reporting framework would look like if you were to apply it to other beats, like education or public health, for example. I’m interested in seeing how that would work.”

While at Harvard, the Nieman Fellows will build study plans around their expertise and serve as resources to students and faculty. In addition to guiding the fellows’ academic studies at Harvard, the foundation runs programming to further educate them about news values and the communications revolution through seminars and professional training.