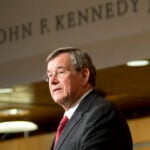 Student achievement stuck in the middle

EdX, the online learning initiative founded by Harvard University and the Massachusetts Institute of Technology (MIT) and launched in May, announced today the addition of the University of California, Berkeley, to its platform.  UC Berkeley, ranked No. 1 among public universities in the United States in 2012 by US News & World Report, will collaborate with edX to expand the group of participating “X Universities” — universities offering their courses on the edX platform.

Through edX, the “X Universities” will provide interactive education wherever there is access to the Internet and will enhance teaching and learning through research about how students learn, and how technologies can facilitate effective teaching both on-campus and online. EdX plans to add other “X Universities” from around the world to the edX platform in the coming months.

UC Berkeley will offer two courses on edX this fall, and the university will also serve as the inaugural chair of the to-be-formed “X University” Consortium.

Robert J. Birgeneau, the chancellor of UC Berkeley, announced:  “We are committed to excellence in online education with the dual goals of distributing higher education more broadly and enriching the quality of campus-based education. We share the vision of MIT and Harvard leadership and believe that collaborating with the not-for-profit model of edX is the best way to do this. Fiat Lux.”

Meanwhile, edX announced two new courses each from HarvardX and MITx to be launched on edX this fall, along with MITx’s 6.002x Circuits & Electronics. All of the courses will be hosted from edX’s website, www.edx.org.

MIT launched its MITx online learning initiative in December 2011, with 6.002x as its prototype course, and more than 150,000 students worldwide enrolled. EdX was announced by Harvard and MIT in May, with each university committing to contribute $30 million toward the online partnership.

“We are very excited that UC Berkeley is joining us in this effort,” said Anant Agarwal, president of edX. “EdX is about revolutionizing learning, and we have received a tremendous outpouring of excitement and interest from universities around the world. UC Berkeley is an extraordinary public institution known not only for its academic excellence but also for its innovativeness. With this collaboration, edX is now positioned to improve education more rapidly, both online and on-campus worldwide.”

“From the outset, we have imagined edX as a platform to be shared with other educational institutions,” said MIT President L. Rafael Reif. “Berkeley’s decision to join the effort is great news: MIT is already seeing the benefits of its collaboration with Harvard, and we look forward to working with our remarkable colleagues at Berkeley as we explore the future of online education. Together, we are sure to learn much about how to enrich residential education even as we reach new learners far from our campuses.”

In addition to the funding commitments by Harvard and MIT, edX has already garnered outside financial support, including two individual leadership gifts. MIT alumnus Philippe Laffont, founder and chief investment officer of Coatue Management, LLC, has made a gift to support MITx in honor of MIT Professor Stephen A. Ward, Laffont’s thesis adviser at MIT. Harvard alumnus Jonathan Grayer, former chairman and CEO of Kaplan, Inc. and co-founder of Weld North LLC, has made a gift in support of HarvardX.

Foundation support has also begun to flow in. Earlier in the summer, MIT received a grant from the Bill & Melinda Gates Foundation. Grant funds will go toward developing an introduction to computer science course on the edX platform and partnering with a post-secondary institution that targets low-income young adults to offer this introductory course in a “flipped classroom” setting, where students watch course videos at home and work together in the classroom.

“Interest from other institutions in collaborating with edX has been enormous from the outset and we are delighted that the partnership announced today by UC Berkeley has come together so quickly,” said Harvard President Drew Faust. “Since the beginning, our goal has been to broaden edX offerings by partnering with other universities who are equally committed to both expanding access to education and improving research about teaching and learning. Today’s announcement is in an important step in that direction.”

UC Berkeley will bring significant, new, open source technology to the edX platform. Developers from UC Berkeley  are working directly with the edX team to integrate the technology.

EdX will release its learning platform as open source software so that anyone around the world can adopt and improve this shared tool. Timing of the release has not yet been determined.

The classes to be offered on edX this fall are:

For this introductory set of courses, certificates of mastery will be available at no charge for each of the courses to those learners motivated and able to demonstrate their knowledge of the course material.

EdX is a not-for-profit enterprise of its founding partners Harvard University and the Massachusetts Institute of Technology that features learning designed specifically for interactive study via the Web. Based on a long history of collaboration and their shared educational missions the founders are creating a new online-learning experience. Anant Agarwal, former director of MIT’s Computer Science and Artificial Intelligence Laboratory, serves as the first president of edX. Along with offering online courses, the institutions will use edX to research how students learn and how technology can transform learning — both on-campus and worldwide.  EdX is based in Cambridge, Mass., and is governed by MIT and Harvard.

Harvard University is devoted to excellence in teaching, learning and research, and to developing leaders in many disciplines who make a difference globally.  Harvard Faculty are engaged with teaching and research to push the boundaries of human knowledge. The University has 12 degree-granting Schools in addition to the Radcliffe Institute for Advanced Study.

Established in 1636, Harvard is the oldest institution of higher education in the United States. The University, which is based in Cambridge and Boston, Mass., has an enrollment of over 20,000 degree candidates, including undergraduate, graduate and professional students. Harvard has more than 360,000 alumni around the world.

The Massachusetts Institute of Technology — a co-educational, privately endowed research university founded in 1861 — is dedicated to advancing knowledge and educating students in science, technology and other areas of scholarship that will best serve the nation and the world in the 21st century. MIT has close to 1,000 faculty and 10,000 undergraduate and graduate students. It is organized into five schools: Architecture and Urban Planning; Engineering; Humanities, Arts, and Social Sciences; Sloan School of Management; and Science.

MIT’s commitment to innovation has led to a host of scientific breakthroughs and technological advances. Achievements of MIT’s faculty and graduates have included the first chemical synthesis of penicillin and vitamin A, the development of inertial guidance systems, modern technologies for artificial limbs and the magnetic core memory that made possible the development of digital computers. Seventy-eight alumni, faculty, researchers, and staff have won Nobel Prizes.

Current areas of research and education include neuroscience and the study of the brain and mind, bioengineering, cancer, energy, the environment and sustainable development, information sciences and technology, new media, financial technology and entrepreneurship.

About the University of California, Berkeley

The University of California, Berkeley, is the world’s premier public university with a mission to excel in teaching, research, and public service. This longstanding mission has led to the university’s distinguished record of Nobel-level scholarship, constant innovation, a concern for the betterment of our world and consistently high rankings of its schools and departments. The campus offers superior, high value education for extraordinarily talented students from all walks of life; operational excellence and a commitment to the competitiveness and prosperity of California and the nation.

The University of California was chartered in 1868 and its flagship campus in Berkeley, on San Francisco Bay, was envisioned as a “City of Learning.” Today, there are more than 1,500 full-time and 500 part-time faculty members dispersed among more than 130 academic departments and more than 80 interdisciplinary research units. Twenty-two Nobel Prizes have been garnered by faculty and 28 Nobel prizes have been awarded to UC Berkeley alumni. There are nine Nobel Laureates, 32 MacArthur Fellows and four Pulitzer Prize winners among the current faculty.