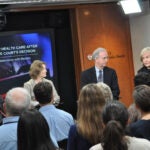 It’s a question on many observers’ minds in an election year: Will Latinos vote in large numbers? And why, historically, haven’t they?

Davíd Carrasco, Neil L. Rudenstine Professor for the Study of Latin America, had an answer for a group of young Latinos gathered at Harvard Kennedy School (HKS) on Wednesday, and it had very little to do with numbers (say, the 50 percent voter registration rate among Hispanics) or political theories.

Instead, his answer came from a phrase coined by poet Robert Duncan: “across great scars of wrong.” In this case, it was a metaphor not just for the long-embattled Mexican border but for generations of oppression and exclusion from mainstream American civic life.

“We’ve got to face up to those great scars of wrong,” Carrasco practically yelled at his 41 charges. “Under great leadership and great courage, we can heal those scars.”

The Latino Leadership Initiative (LLI), where Carrasco was holding forth, might be Harvard’s most comprehensive attempt yet to help mend that deep-seated wound. Now in its third year, the program, sponsored by the Center for Public Leadership and funded by outside donors, brings promising college students to Harvard for a week of community-organizing training, personal reflection, and networking.

LLI’s instructors, drawn from across Harvard’s Schools, see the program as a chance to address a leadership deficit in the country’s young and rapidly growing Latino population.

“This group is really crucial to the prospects of the nation,” said Andy Zelleke, a Harvard Business School senior lecturer and LLI’s faculty director. “Young Latinos are going to be, disproportionately, the engine of the United States’ population growth. This is a source of potentially great strength for the U.S.”

What those communities need, LLI argues, is savvy advocates and organizers. The program — which draws from eight schools, including the local University of Massachusetts, Boston — doesn’t look for “valedictorians,” Zelleke said, but for students of any ethnicity with a track record of serving Latino populations.

“The commitment they feel toward bettering their communities is really palpable,” Zelleke said. “They’re hungry for the tools to be more effective.”

“What we’re trying to do is take it to the next level,” he explained. “We’re trying to give them a structured approach to developing their own leadership this week and, more important, after they leave campus.”

While students take courses in more straightforward community-organizing skills — such as Zelleke’s negotiation class, and a session on public speaking — the core of the curriculum is developed around the ideas of Marshall Ganz, a senior lecturer in public policy at HKS who spent nearly three decades as an organizer, primarily with Cesar Chavez and the United Farm Workers in California. A part of Ganz’s focus is helping students to develop public narratives — of their own lives, their communities, and their shared mission.

To drive the concept home, LLI brings in a host of successful guest speakers, such as U.S. Attorney for Massachusetts Carmen Ortiz, for its students, 70 percent of whom are the first in their families to attend college.

“She comes from Spanish Harlem just like me; she’s Puerto Rican just like me,” Paul Rosario, a student from the City University of New York’s Macaulay Honors College, said, referring to Ortiz. “To hear how close our stories are really motivated me.”

During the week, student teams from each of the colleges develop community service projects to implement, with ongoing help from LLI leaders, once they return to their home campuses in the fall.

“The whole pattern of development where a learner becomes a teacher is a very powerful model,” Ganz said.

TAMIU’s student body is 95 percent Latino. The campus is located in Laredo, a city where 99 percent of public school students qualify for the federal lunch program. Spanish is pervasive. “My kids grew up with it as their first language,” Keck said. The idea of training just a handful of high-achieving Latino students in such a disadvantaged community wouldn’t suffice.

“It wasn’t until I came here that I realized leadership needs to be intentional,” Keck said. “Leadership is about community, and helping empower that community.” In part thanks to LLI, TAMIU now offers a leadership minor and certificate program.

LLI’s leaders recognize that many young Latinos face serious hurdles — endemic poverty, the language barrier, and ever-changing (and controversial) immigration laws, to name a few. But “there’s a tremendous energy in the community, a lot of hope, a lot of youth,” said Ganz. The students also have unprecedented access to higher education, in part “because of the fact that their parents’ [generation] organized and fought for those rights,” he said.

Rubi Almanza, 21, a rising senior at the University of California, Merced, certainly fit that description. Almanza’s trip to Cambridge marked her first time traveling outside California since she came to the United States with her farm-worker parents and two younger siblings five years ago.

Though she had faced a steep learning curve in her American high school — she at first spoke no English — she became determined by her senior year to be the first person in her family to go to college. She now attends UC Merced full time and still lives with her parents in nearby Planada, in community housing for migrant workers.

An applied mathematics major, her goal is to return to her predominantly Spanish-speaking high school in Planada to teach math, and to inspire more students to attend college. LLI was her first experience with leadership training, she said.

“I’m learning so much more than I was expecting,” Almanza said. “This has changed my life. It’s been such a great opportunity, and I’ll never forget it.”