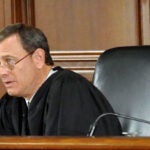 Win for Obama, but no let-up in debate

On the same day that the U.S. Supreme Court upheld the national health care law, medical researchers from around the globe gathered at the Broad Institute of Harvard and MIT for the annual New England Tuberculosis Symposium. The focus of the all-day event was a disturbing global health trend: the emergence of a form of incurable tuberculosis that is drug-resistant.

The highlight of Thursday’s symposium was an eight-member panel, moderated by Barry Bloom, that focused on the reasons for the emergence of drug-resistant TB, especially in poorer nations such as India, and what can be done to remedy this growing crisis. Bloom is a Harvard University Distinguished Service Professor and the Joan L. and Julius H. Jacobson Professor of Public Health at the Harvard School of Public Health.

Khisimuzi Mdluli from TB Alliance, a global nonprofit working against the disease, spoke repeatedly about the need to develop new drugs to combat tuberculosis. Since the 1960s, two drugs — isoniazid and rifampicin — have been the standard TB treatment. “We need more choices,” said Mdluli, “so if people don’t respond to the first [treatment] regimen, what can we do next? We don’t have good answers.”

According to the World Health Organization, millions of people (8.8 million in 2010) contract tuberculosis each year, and about a million die from it. Mdluli called for more mobilization around fighting TB, urging a coordinated public awareness campaign similar to the one waged around HIV.

The disease, he says, is mistakenly viewed as a problem of poverty. “TB doesn’t discriminate; anyone can get it,” he said. When asked by Bloom what is needed to foster the development of new drugs, Mdluli replied: “money, money, money.”

Epidemiologist Bob Horsburgh of Boston University seconded Mdudli’s assertion that TB attacks the poor and rich alike. “We need to convince the upper classes that they are at risk too, because they really are,” he said. “It’s not uncommon [in places like India] for a lower-class household worker to spread TB to the whole [upper-class] household.”

One of the main problems in detecting, and thus treating, tuberculosis, the panelists agreed, is the public stigma attached to having the disease. Sarah Fortune, the Melvin J. and Geraldine L. Glimcher Assistant Professor of Immunology and Infectious Diseases at the Harvard School of Public Health, detailed how crucial early detection can be in treating TB, explaining that educating people about better treatment options can help remove any stigma and thus help early detection efforts.

Zarir Udwadia, a doctor and TB specialist at Hinduja National Hospital in Mumbai, India, described the rising stress that drug-resistant tuberculosis is placing on India’s already-overstretched health care system. “In India,” said Udwadia, “the public health system is lousy; people don’t want to go there,” so they go to private health providers, who are largely unregulated.

He called for a public-private partnership in India, where “TB might be diagnosed in the private sector, and then patients could get treatment in the public sector.”

The panel also included Jeremy Greene, Harvard assistant professor in the history of science and instructor at Harvard Medical School (HMS); Scott Podolsky, assistant professor of global health and social medicine at HMS and director of the Center for the History of Medicine; and Rob Warren of Stellenbosch University in Cape Town, South Africa.

The panelists agreed that more resources needed to be placed on treating drug-resistant TB. Horsburgh summed up the issue: “We’ve had the tools to cure TB for 40 years now. Why have we failed? We lacked the political will to do it. We need to do what AIDS activists have done to raise awareness” for a cure.

The symposium was a step in that direction. Early in the session, Bloom told the panel that he’d recently been asked by India’s prime minister to serve as an adviser in that nation’s search for a new health minister. Bloom garnered laughter from the panel and the audience when he described the discussion as “a job interview” for each of them.