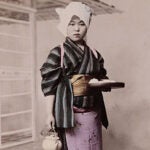 In case you ever wondered, world literature in anthology form is 11 inches high, 9 inches wide, and weighs 10 pounds, 8 ounces.

The world’s textual creative output in the last 4,000 years is gigantic, a vast cosmos of creation myths, lyric poems, histories, travel narratives, plays, novels, and stories in hundreds of written languages, beginning with cuneiform. It’s an output so big that it defies captivity in print.

But in a feat of thoughtful compression, eight North American editors — with a Harvard professor in the lead — have just released the third edition of a classic initially published in the 1950s. “The Norton Anthology of World Literature,” at six volumes and 6,000 pages, brings millennia of written genius down to the size of a four-slice toaster. At the same time, this compact anthology dwarfs its flyweight Eisenhower-era antecedent, a one-volume compendium of “Western masterpieces” that spanned only about 400 pages.

“We are living in a larger world,” said Harvard’s Martin Puchner, general editor of the new volumes, and our view of world literature should be correspondingly big. Puchner, a world-traveling native of Germany and master of seven languages, is the Byron and Anita Wien Professor of Drama and of English and Comparative Literature.

The new Norton anthology — Volumes A through F — took about five years to assemble, edit, and expand, he said, and in its first year will be used by 50,000 American students. There are hundreds of new selections, along with new maps, illustrations, introductions, contextual essays, and translations. (For one startling example of newness, go to page 171 of Vol. A. You will find a Robert Alter translation of Genesis, 25, illustrated by R. Crumb in graphic-novel style.)

The new volumes also feature clusters that explicate major themes common to all periods and places. The thematic clusters are designed, along with the crisp new introductions, to hold students steady in what otherwise might be a chaotic “sea of texts,” said Puchner. When the team of editors first met, he said, “We had to admit to ourselves that world literature, in its nature, is overwhelming and scary.”

The volumes also provide a ballast of cultural and literary context that is calming and guiding. They help professors ‘ many of whom are schooled in just one period or genre — to navigate dozens of remote centuries and vanished cultures. “No one feels competent to teach all this stuff,” said Puchner. To help even more, a Web site related to the book is being augmented this summer, and will include a pronunciation guide for seemingly exotic titles and authors. “It’s a big anxiety for students,” he said of pronunciation, “and for teachers too.”

The new volumes, with heavyweight covers and silky thin pages, are part of a big family of such anthologies conceived by W.W. Norton  & Company Inc. in the last six decades. That includes another classic, “The Norton Anthology of English Literature,” first published 50 years ago and now in its ninth edition. Its general editor is another Harvard scholar, Stephen Greenblatt, the John Cogan University Professor of the Humanities.

Puchner will be the first to admit that the best way to experience world literature is by reading texts in the original language. (He speaks English, German, French, and Italian, and can read Spanish, classical Greek, and Latin.) But no one has mastered every language, or even many, and certainly not 2,000-year-old Mayan glyphs or the Sanskrit in Vedic hymns of 3,000 years ago. Yet anyone should be able to enjoy the stunning English approximations of experts, said Puchner. “Reading literature in translation can be an incredibly enriching thing.”

He cited a favorite example of a text that, without translation, would have remained as distant to him as Mars: “Popol Vuh,” a narrative epic of the Mayans transcribed in the 16th century. (“Humans get created only on the fourth try,” said Puchner.)

“Popol Vuh” is also a good example of how different humans are, and yet how the same they are and always have been. Something like these words appeared first as Mayan glyphs nearly 2,000 years ago, but echo the biblical Genesis, first written in ancient Hebrew. “There is not yet one person, one animal, bird, fish, crab, tree, rock, hollow, canyon, meadow, forest,” one passage reads. “Only the sky alone is there; the face of the earth is not clear.” It’s a text that Puchner said he can’t imagine living without now, and one that inspired him on a recent visit to remote Mayan ruins so far into the jungle that he had only clambering monkeys for company. (Puchner is working on a book, due out in 2014, on the world literature of travel.)

But translations remain an issue for critics of anthologies. So do attempts to canonize literature (a step that Puchner said is necessary, but that can remain flexible and responsive). Some critics object to narrative simplifications of complex and obscure cultures, many of them ancient. “The past is a strange country,” he admitted. “But you have to translate that to a student. I have come to think of that as an incredibly important thing to do.”

These “translations” of culture are more important than ever in a growing global society, “a world so interconnected,” said Puchner, that students will soon enter a work force that “may well be operating worldwide.” Among the consequences of a widening sense of global society is the need for people to understand one another outside national borders, he said. “An education in a national literature alone seems increasingly anachronistic.” Meanwhile, literature provides unique access to social norms and divergent national histories, said Puchner, “a fantastic way into the DNA of different cultures.”

Across the globe, there are so many differences and so few ways to understand them. “The Norton Anthology of World Literature” provides one answer in an observation from “The Great Hymn to the Aten” (ca. 1350 B.C.E.), an Egyptian tomb inscription celebrating the power of the sun. “You set every man in his place,” it reads of the life-giving orb, but:

Their tongues differ in speech,

Their skins are distinct,

For you distinguished the peoples.

Despite the need to understand other cultures, it is mostly American colleges that use the anthology, said Puchner — about 500 of them, and largely outside the Ivy League. For one thing, only U.S. institutions widely embrace the ideal of “the creative chaos of a liberal arts education,” he said, an unspecialized hodge-podge of subjects that is mirrored by the Norton book.

America is also the world’s only superpower, and so, perhaps, needs to study a range of cultures, including through the lens of letters. “The place where world literature is alive and well,” he said, “is the United States — and almost only in the United States.”

Ahead, said Puchner, are two variations of the new anthology: a two-volume condensation designed for one-semester courses, and a two-volume set focused on Western literature. The latter is for colleges that appreciate the need for a look at world literature, he said, “but maybe hesitantly so.”