With health rights denied, a patient had no hope 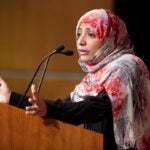 A Nobel cause in the Arab world

“Misriya” lay in a Tanzanian hospital’s delivery room. All around her was the noise and activity of women giving birth, bringing life into the world, but she was beyond that.

Misriya, who was HIV-positive, had died in childbirth the day before, but amidst the delivery ward’s chaos, her body hadn’t been moved. An IV remained in her arm. That’s when Alicia Yamin noticed a bundle on a nearby windowsill. It moved when she touched it. The woman’s baby, untended since birth, was still there, struggling to live.

Yamin, director of the Program on the Health Rights of Women and Children at the Harvard School of Public Health’s François-Xavier Bagnoud Center for Health and Human Rights (FXB), alerted the hospital staff and made sure the family, waiting outside, got the child so the infant could be cared for.

Yamin shared lessons from the experience on Monday during the opening session of a weeklong executive education course at the Harvard School of Public Health. The course, which attracted participants from 23 countries, is focused on the health rights of children and of women.

Running through Friday, the course examines health, including care, as a right, and the use of courts to secure it. Sessions include discussions on the role of the courts, on litigation strategy, on setting health care priorities, on children’s rights and health, on pre-trial detention and health, and on implementing court decisions. Participants include lawyers, economists, scientists, physicians, and a former constitutional court justice.

The course aims to strengthen the skills needed to take cases to court and ensure decisions are implemented. Health rights litigation, Yamin said, is a field that has been emerging internationally for more than a decade. There have been hundreds of thousands of cases litigated around the world on issues like access to HIV drugs and cancer care.

Jennifer Leaning, the François-Xavier Bagnoud Professor of the Practice of Health and Human Rights and director of the FXB Center, said the United States lags the rest of the world in understanding the linkage between health and human rights. The course, she said, is a step in pushing this discussion out to the public and policymakers.

Beyond the course’s subject matter, Yamin said she hoped the class helped foster creation of an enduring network, and that students afterward not only stay in touch with class organizers but with each other.

Charles Ingabire, who works in Rwanda on the mental health issues of children in families with AIDS, took the class because he’s interested in ensuring more people have access to health care. He’d also like to work with the nonprofit People’s Health Movement, which has the similar goal of health care for all, and establish a chapter of the organization in Rwanda.

Yamin used Misriya’s story to illustrate the desperate need around the world. Clearly, the health care system failed the 17-year-old mother, not just in the way she died, but in not providing HIV counseling early on and and not providing antiretroviral drugs. But it wasn’t just the health care system that failed her, Yamin said. Misriya had little education and few choices in life. She was married off to a man who was HIV-positive by her family. Once married, she had no say over whether they had sex or whether she had a baby. After she entered the hospital, her HIV infection may have led hospital staff to end blood transfusions when she began to hemorrhage during childbirth.

In the weeks following the death, Yamin relayed Misriya’s story to experienced international aid workers, who told her it was an unfortunate incident but questioned Yamin’s continued outrage. After all, things like that happened regularly in Tanzania, they  said. Rather than her outrage fading, however, Yamin said indignation underlies the course and the movement to help change the world through litigation and other tools.

“I want us to feel and sustain that energy of outrage,” Yamin said.