The rigor of reargument 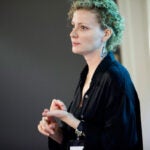 With health rights denied, a patient had no hope

Russell Kornblith got his J.D. at Harvard Law School in May. Compact and fit, he looks like a vest-pocket Superman, able (perhaps) to leap tall buildings in a single bound. But his latest feat of strength was staying up late — for 14 weeks.

It was for a good cause, and Kornblith had plenty of company. Since early March, two professors from Harvard’s International Human Rights Clinic and four law students — all from the Class of 2012 — each worked up to 80 hours a week. They scoured archives, pored over cases, and struggled to craft the right language for  a brief of amici curiae — a “friends of the court” brief — in the matter of Kiobel v. Royal Dutch Petroleum. It’s now on its way to the U.S. Supreme Court.

The lawsuit, brought by 12 Nigerians, alleges that the Dutch oil company was complicit in torture, extrajudicial executions, and other crimes against humanity from 1992 to 1995. The plaintiffs are members of the Ogoni people of the Niger Delta, who during this time were protesting a new pipeline being laid by Shell contractors. The amici — the clinic’s clients — are nine legal historians, including Charles Donahue, Harvard’s Paul A. Freund Professor of Law.

Susan H. Farbstein, a team member and an assistant clinical professor at Harvard Law School, called Kiobel ”one of the biggest human rights cases the [Supreme Court] has heard in recent years.”

At issue: What are the limits of corporate liability? And can U.S. courts hear lawsuits regarding incidents outside U.S. territory? (It’s an issue lawyers call “extraterritoriality.”)

Behind those questions is a debate over the interpretation and intent of the Alien Tort Statute, a 1789 law that allows foreigners to bring suit in U.S. courts. The statute was seldom cited until 1980, when it was revived as the basis for international human rights litigation.

“Decades of jurisprudence are on the line in Kiobel,” said Clinical Professor of Law Tyler R. Giannini, who co-directs the clinic with Farbstein. “Cases have been litigated for more than 30 years for claims arising outside the United States, including for more than 15 years against corporations.” A Supreme Court ruling against either corporate liability or extraterritoriality, he said, “would represent a radical departure from this recent history.”

That departure would limit the right of plaintiffs to seek redress from multinational corporations. For those writing the brief, the stakes were high.

The team established a “war room” in Pound Hall and, after December, on the third floor of Wasserstein Hall. The brief came to life there, line by line, on a large-screen monitor. “We endlessly discussed the significance of historical cases and doctrines amongst ourselves and with the amici,” said Giannini. “There were countless calls, discussions, and drafts exchanged until we had a polished brief.”

Finishing was a triumph. The magic moment came just after 5 p.m. June 13, when the team filed its 35-page brief (plus appendices) electronically. Kornblith was up until 5 a.m. that day, hammering out last-minute details via Skype, talking at his computer. “The neighbors complained,” he said.

Case history
In February, the Supreme Court was confronted with a lawsuit that might have seemed out of place: Nigerian plaintiffs suing a Dutch company in American courts over alleged abuses committed in Africa. Associate Justice Samuel Alito Jr. seemed skeptical. “What business does a case like that,” he asked, “have in the courts of the United States?”

That question will be resolved after the court meets again in October. Meanwhile, the two rounds of briefing on Kiobel drew a flurry of amicus briefs from interested parties (amici) on both sides of the question: multinational corporations, governments, South African jurists, Nuremberg scholars, and specialists in international law, business law, human rights, and civil procedure.

During oral arguments before the court on Feb. 28, only corporate liability, the first issue, was highlighted. (The same team wrote a brief for that.) “We know that corporations have rights,” said Farbstein. “The question is whether they will also have liabilities.”

But the justices asked for a second round of briefs, what lawyers call a “reargument,” on the issue of extraterritoriality. That’s unusual, said Farbstein. “It means that the justices were interested in this question and felt it wasn’t sufficiently addressed in the first round of briefing.”

In early March, the team received a specific task from its nine clients, the legal historians: Use history to make an argument for the legal soundness of extraterritoriality.

Writing a legal history brief had already worked well for the Harvard team in the first round of arguments. It had uncovered “The Case of Thomas Skinner, Merchant v. The East India Company,” a 1666 British trial that put an individual head to head with the biggest proto-corporate player of the 17th century. Skinner showed, said Farbstein, that “even a powerful corporate actor can be held accountable when it commits international law violations.”

History shows that the Alien Tort Statute meant that civil liability for international law violations would follow the defendant, said Giannini. “The basic principle at the time … was that a violator could be held accountable wherever he could be found, and that still holds true today.”

Go back to 1789, Kornblith said, to the framers of the statute and to their intentions. “The idea behind the First Congress’s actions was that this was a statute meant to cover acts that concern the whole world,” he said. “One of these acts is not just an assault on the person who was assaulted, it’s an assault on principles of justice and humanity.”

The team brief also used two stark historical examples of how a “universally accepted law of nations” was often applied, despite where alleged offenses occurred: piracy and — eventually — the slave trade.

But the Alien Tort Statute itself, its antecedents, and the context of its framing do not tell the whole story. The young United States wanted to tell the world it respected international law, said Farbstein, and that it would be a beacon of justice.

“This gets back to what values we hold dear as a country,” she said. “Are we going to harbor individuals who commit these kinds of egregious abuses? … Are we going to say they can be held accountable here because we have bold international law principles — or not?”