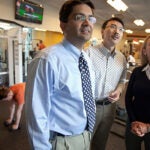 In a finding that could fundamentally rewrite science’s understanding of how some parasite-host relationships work, Harvard researchers have found that, despite being separated by more than 100 million years of evolution, the parasitic “corpse flower” of Southeast Asian rain forests appears to share large parts of its genome with its hosts, members of the grapevine family.

The two plants share the genome parts, researchers believe, through a process known as “horizontal gene transfer.” Horizontal transfer occurs when genes are passed between organisms without sexual reproduction, as opposed to vertical transfer, in which a parent passes genes to its offspring,

As described in the June 6 issue of BMC Genomics, in a study co-led by Harvard and Stony Brook University, researchers found that this type of genetic sharing between plants is much more widespread than had been suspected, and that some genes borrowed by the flowers are likely functional, and may have replaced vertically inherited copies. The surprising finding, said Charles Davis, professor of organismic and evolutionary biology and curator of vascular plants in the Harvard University Herbaria, suggests that the process may convey some evolutionary advantage to the flowers, which are the largest in the world.

“We found that several dozen actively transcribed genes likely originated from the flower’s host,” said Zhenxiang Xi, a graduate student in Davis’ lab, and first author of the paper. “In addition, we found evidence that about one-third of the parasites’ own vertically inherited genes have evolved to be more like those of hosts, suggesting that there might be a fitness benefit to maintaining genes that are more hostlike.”

“At the outset, we wondered if it could be that a subset of these genes might provide some defense from the host mounting an attack,” Davis added. “However, the genes coming to the flowers represent a broad swath of functions, including respiration, metabolism, and perhaps some useful for defense. If so, these findings might reflect a sort of genomic camouflage, or genomic mimicry for the parasite.”

The new paper builds on research Davis conducted in 2004, just before coming to Harvard, which focused on understanding the evolutionary origins of such “extremophiles” that thrive under conditions where most life would not.

“For years, these plants have been something of an evolutionary mystery, because they simply don’t possess the genetic tool kit — primarily, the genes associated with photosynthesis — that evolutionary biologists have used to place them on the broader tree of life,” Davis said. “These plants have reduced themselves so much, they’ve actually lost many of the genes associated with photosynthesis.”

Using newly developed genomic tools, he identified the plants that are the closest relatives of the enormous flowers, but also stumbled into something surprising — a single region in the flower’s genetic code that was more like its host than itself.

The realization that the flowers and vines appeared to be related, Davis said, was a “eureka moment.”

“These species are quite evolutionarily diverged from one another, yet they have a very close, intimate physical proximity,” he said. “The parasite literally cannot live without being inside the host. Our study was one of the first to show that parasitic systems characterized by close physical contact are an area where horizontal gene transfer is taking place.”

Knowing that horizontal gene transfer was happening, however, was only part of the story. Left unanswered, he said, were questions about the magnitude of these transfers, what type of genes were moving, whether those genes were functional in the flowers, and to what extent vertically inherited genes may have been replaced by horizontally acquired ones.

“Following the 2004 study, there was a great deal of momentum behind the idea that the parasite-host relationship was a hotbed of activity for horizontal gene transfer,” Davis said. “But no one had tackled this question in a broad, systematic way. Our paper was the first to hit this problem, and what we found was [that] gene transfer is indeed prevalent in these parasites, and that some of those genes are likely functional.”

Davis’ research didn’t stop at the genes that the flowers adopted from their host. In examining the vertically inherited genes of the parasite — those inherited from a parent — researchers found that the molecular coding of the parasites was strikingly similar to that of its host. Put simply, he said, the flowers are “learning to speak the genetic language” of their hosts, and not simply acquiring their genes.

“What we think is that the genes in the parasite are independently converging on the genetic coding of the host,” he said. “Of course, in this case, it’s more likely easier to acquire genes through horizontal gene transfer if your own genetic machinery is more like your host. But when we started to find these patterns, it amazed me. If true, it’s a pretty diabolical strategy on the part of the parasite.”