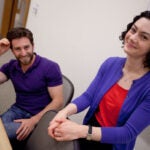 The rigor of reargument

The financial crisis in Spain is a “bottleneck” that will soon break, restoring a vibrant economy.

Meanwhile, a triangle of economic and cultural interchange — among Spain, the United States, and Latin America — represents “enormous potential.”

Crown Prince Felipe of Spain, visiting Harvard yesterday, delivered these messages — along with an arresting historical brief on how those powers have been entwined for centuries.

The visit was sponsored by Harvard’s David Rockefeller Center for Latin American Studies. Felipe’s remarks, addressed to 200 listeners in the Joseph Nye Conference Center at the Harvard Kennedy School, followed a luncheon at the Faculty Club and a private tour of Widener Library.

Felipe, who is 44, with degrees in law and foreign policy, could have talked on any number of topics. (He was an officer in Spain’s army, navy, and air force; he is also an Olympic sailor, helicopter pilot, and philanthropist.) But he chose to speak about geopolitics in “Spain: An American Nation” — a deliberately provocative title.

“Spain is indeed an American nation,” said Felipe, citing its role in the New World.

The notion that Spain has “a substantial American dimension or identity,” he said, needs to be more visible. It’s an important way of conceptualizing Spain’s connection to the Americas. This history, said the prince, is the key to cooperation among Spain, the United States, and Latin America — an avenue for bolstering economies and reducing poverty and inequality.

The relationship goes back to the 15th century, when Spaniards became “the first Europeans … to put the Atlantic’s western seaboard on the map,” he said. Over time, Spain was to govern vast areas of the Caribbean and Central and South America, and — of course — virtually the entire territory west of the Mississippi.

Culturally, Spain gave rise to “lifestyles and value systems” that are prevalent in the Americas — “a Spanish footprint,” said the prince, of “vigor, depth, and scope.”

The prince praised Harvard for its 375th anniversary, but also pointed out that Spain established the hemisphere’s oldest universities, starting in the 16th century with Universidad Santo Tomás de Aquino in the Dominican Republic. (It closed in 1823.)

And consider what the prince called “a key sociocultural phenomenon” marking the Americas: the “mestizaje” identity, a “mixing together” of European, African, and indigenous American bloodlines. “Never before in history,” he said, “had mankind experienced such a far-reaching melding process.”

But among the strongest reasons that Spain is an “American nation” is also the most obvious: the Spanish language, which has 500 million native speakers, most of them in the Americas. (Spanish is the world’s second most prevalent native language, after Chinese.)

Also in Spain’s “American” identity is a language that everyone in the world understands: economics. Spanish itself is valuable on that score, said the prince; more than 20 other countries share the language and the resulting economic value to Spain is about 15 percent of its GDP.

Then there is the value of “linguistic tourism,” he said — nearly $600 million a year, in part because Spain is the second-most popular destination for U.S. study abroad programs.

In response to a question, the prince talked about keys to developing strong leadership. “Education is fundamental,” he said, as long as it includes “principles, values, and ethics” at the core.

Felipe oversees the Prince of Asturias Foundation, which since 1981 has awarded prizes to writers, artists, and scholars. Among the Harvard recipients over the years: Howard Gardner, the late Judah Folkman, Al Gore ’69, and George Whitesides.