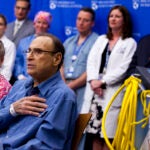 Insights on host-specific bacteria may aid study of autoimmune disorders

Gut bacteria’s key role in immunity is tuned to the host species, researchers have found, suggesting that the superabundant microbes lining our digestive tract evolved with us — a tantalizing clue in the mysterious rise in human autoimmune disorders.

A new study reports that the superabundance of microbial life lining our GI tracts has co-evolved with us. These bacteria, which are essential for a healthy immune system, are ultimately our evolutionary partners.

This study, the first to demonstrate that microbes are specific to their host species, also sheds light on the “hygiene hypothesis.” According to this idea, increasingly hyper-hygienic environments might be contributing to a rise in childhood allergies, as these beneficial host-specific microbes are hindered by a plethora of antibacterial home products and cleaning chemicals.

“For every cell in your body that is you, that contains your specific genetic information, there are approximately nine foreign bacterial cells, primarily in your digestive tract and even on your skin,” said Dennis Kasper, Harvard Medical School professor of microbiology and immunobiology and senior author on the paper. “From the viewpoint of cell count, every human being is 90 percent microbial. Now we’ve found that these bacteria, which we need for optimal health, are species-specific.”

The paper appears in the June 22 issue of Cell.

That 500 to 1,000 microbial species inhabit mammals has long been documented. Researchers have suggested that when it comes to digestion and other metabolic activities, the particular species of bacteria may not be significant provided the bacteria contain specific, helpful genes. A bacterium that breaks down food in a mouse gut can probably do the same in a human.

But the microbes that fortify our immune system have not been studied in this regard. Are they functionally unique, or would any species suffice?

Hachung Chung, a postdoctoral researcher in Kasper’s lab, studied two groups of mice, both bred to lack microbial flora. For one group, she introduced microbial species that are natural to mice, and for the second, she introduced human microbes.

For both groups of mice, an equal quantity of microbes, and an equal diversity of species, soon flourished in their digestive tracts.

But despite this apparent similarity, when Chung examined the intestinal tissue, including intestinal lymph nodes, she discovered that the mice with humanized microbes had surprisingly low levels of immune cells, levels equivalent to mice lacking intestinal bacteria altogether.

“Despite the abundant and complex community of bacteria that were in the human flora-mice, it seemed like the mouse host did not recognize the bacteria, as if the mice were germ-free,” said Chung.

Chung repeated the experiment, only this time populating a third group of mice with microbes common to rats. This new group showed the same immune system deficiency as the humanized mice. “I was very surprised to see that,” Chung said. “Naturally, I would have expected more of a halfway response.”

“This raises serious questions regarding our current overuse of antibiotics, as well as ultra-hygienic environments that many of us live in,” said Kasper. “If the bacteria within us is specific to us and necessary for normal immune system function, then it’s important to know if we are in fact losing these vital bacteria. Are we losing the bacteria we have co-evolved with? If that is the case, then this is yet further evidence supporting the idea that the loss of good bacteria is partly to blame for the increased rates of autoimmunity that we are now seeing.”