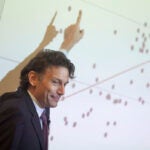 Studies detail massive ‘microbiome’ and how it functions in the body

New studies involving Harvard School of Public Health (HSPH) researchers have helped to identify and analyze the vast human “microbiome,” the more than 5 million microbial genes in the body.

Scientists estimate that each person carries about 100 times as many microbial genes as human genes, and they want to learn more about the role that microbes — organisms like bacteria, viruses, and fungi that live in the stomach, in the mouth, on the skin, or elsewhere — play in normal bodily functions, like development or immunity, as well as in disease.

As a result of this effort, HMP consortium researchers calculate that there are more than 10,000 microbial species that live in humans. Previously, only a few hundred bacterial species had been isolated. Between 81 and 99 percent of the genera, or basic family groupings, of these microorganisms in healthy adults were found during this study.

These included several opportunistic pathogens, microorganisms that typically coexist harmlessly with the rest of the microbiome and their human hosts, but which can cause disease under unusual circumstances.

At HSPH, researchers outlined powerful new computational methods for cataloging the massive amount of genetic information about the human microbiome and began to analyze the way these microbes function in the body, such as in digesting food or reducing inflammation.

“This research tells us the range of healthy variation in microbial function and in specific bugs. Knowing which sorts of microbes are normally found in healthy people can help us understand the roles they play during changes in disease,” said Curtis Huttenhower, assistant professor of computational biology and bioinformatics in the Department of Biostatistics at HSPH. “Just as human genome sequencing helps us figure out how a person’s genes put them at risk or protect them, so too can the microbial genomes associated with the human body provide information about health benefits or risks.”

(At the Broad Institute of Harvard and MIT, Dirk Gevers, a group leader in genome sequencing and analysis, was first co-author of a Nature paper, and co-author of another. Broad researchers Doyle Ward and Bruce Birren were co-authors of the Nature papers. Broad scientist Georgia Giannoukos and her team developed protocols to allow the project to sequence thousands of study samples.)

Huttenhower, who co-led several of the consortium’s analysis efforts, also helped to coordinate the analysis paper published in Nature and was senior author on two papers.

The main Nature paper outlined how HMP researchers, in the most comprehensive assessment to date of the normal human microbiome, found a remarkably diverse and abundant range of species that are personalized within individuals.

“We’ve been able to assess that each person’s microbial signature is fairly unique, in much the same way that an individual’s genome is unique,” said Huttenhower.

The researchers speculated that variations in an individual’s microbiome may be connected to diet, genetic makeup, early life events such as breastfeeding, environmental exposures, and immune function, or other factors.

In the past, most human microbial species had not been successfully analyzed because of the difficulty of cultivating them in the lab, presumably because their growth is dependent on being in the specific environment provided by their hosts. But the current efforts rely on a type of analysis called metagenomics, which uses genetic material drawn directly from environmental samples — in this case humans.

To define and analyze the normal human microbiome, HMP researchers sampled 242 healthy male and female volunteers, collecting tissues from 15 body sites in men and 18 in women — such as the mouth, nose, skin, and lower intestine — at different points in time.

For a paper that appeared in Nature Methods, Huttenhower and his colleagues, including lead author Nicola Segata, research fellow in the Department of Biostatistics at HSPH, used novel computational methods to identify about 350 of the most important organisms in these microbial communities.

Using DNA sequencing, the researchers were able to sift through 3.5 terabytes of genomic data and pinpoint genetic “name tags,” or sequences specific only to these bacteria. The researchers were then able to identify where and how often these bacterial markers occurred throughout the HMP’s healthy population. This highly sensitive microbial detection allowed, for example, the cataloging of more than 100 opportunistic pathogens, which aids the understanding of where in the microbiome these organisms occur normally, before potentially causing disease.

For a Public Library of Science computational biology paper, Huttenhower and colleagues studied the functions performed by the microbes. This required searching the DNA sequences for markers, not of specific microbes, but for individual metabolic processes. The researchers found that while there is a great deal of variation among types of microbes found in different people and in different body sites within individuals, the microbes’ functions were much more consistent.

“There are tremendous differences in which particular bugs are present in an individual, but different bugs perform the same sorts of functions in specific areas of the body,” Huttenhower said.

For instance, he said, the gastrointestinal tract can contain many kinds of microbes able to perform a similar function, such as breaking down complex starches. Likewise, in the mouth, different microbes might specialize in processes that help them to survive in that habitat, such as processing the simple sugars available in the mouth. In the vaginal tract, microbes considered to be beneficial can aid the immune system by repelling dangerous bacteria.

These findings highlight the fact that, for the most part, microorganisms play helpful roles in our bodies.

Other HSPH authors on the Nature Methods paper include Levi Waldron, research fellow, and student Vagheesh Narasimhan, both from the Department of Biostatistics. Segata was also a contributor to the computational biology paper and the lead author on a paper in Genome Biology that offered a detailed profile of microbes that live in the human gastrointestinal tract.

HMP is funded by the National Institutes of Health Common Fund, an initiative that finances high-impact, large-scale research.