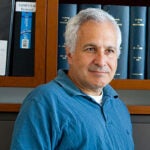 Microbes, at work inside of us, are of rising interest to researchers for role in health, diet

Without the bacteria that live in our intestines, a drug used against rheumatoid arthritis and inflammatory bowel disease wouldn’t work.

The microbes produce an enzyme that cleaves and activates a key molecule in the drug. Scientists know the microbes responsible are there and that this activity is important, but they don’t know which microbes are responsible, or even how many kinds provide this service.

Another type of intestinal bacteria can keep drugs from reaching target tissue, altering a Parkinson’s disease treatment in the same way the brain would, preventing absorption. Researchers believe that differences in patients’ microbial communities could account for the drug’s variable effectiveness. The culprit microbe, again, is unknown.

The Harvard lab of Bauer Fellow Peter Turnbaugh is working to identify these mysterious microbes, and to better understand how the bacteria that live within us affect the drugs we take and the exotic foods we eat, collectively called xenobiotics.

“There are very few examples where we know the link between gut microbes and xenobiotics — that’s one thing I’d like to change,” Turnbaugh said. “I think we’re really at the very beginning.”

This month, some 200 scientists from 80 institutions, including Harvard and the Broad Institute of Harvard and MIT, filled in some of the blanks. They announced results from the massive Human Microbiome Project, a government-funded effort to uncover the scale and diversity of the microbes we carry and to analyze their genomes to provide tools for future researchers.

The scientists found that we carry some 100 trillion bacteria from some 1,000 different strains, many of which are new to science and some of which, though known to cause disease, were found living peaceably among 250 healthy volunteers.

Though there was understanding in the past that the microbes we carry affect our health, the advanced tools of genomics have fostered recent progress, Turnbaugh said. In a recent article in the journal Science, Turnbaugh and postdoctoral fellow Henry Haiser argued that a better understanding of our microbes’ metabolic activity and how they interact with our bodies in ways that both promote health and cause illness could revolutionize how we understand and treat disease.

Postdoctoral fellows, interns, and other researchers in Turnbaugh’s lab, which is not part of the Human Microbiome Project, are at work on 10 to 15 projects. Though the human body has microbes in many places — including the mouth, intestines, and skin — Turnbaugh has been focusing on those in the intestines. He collects samples from the feces of volunteers and from “gnotobiotic” laboratory mice, born and maintained in a microbe-free environment before they are colonized experimentally. Using an oxygen-free incubation chamber to grow microbe colonies that favor the anaerobic intestinal conditions, as well as cell-sorters and gear that aids advanced genomic analysis, researchers are investigating a variety of questions.

One project, conducted by Haiser, is examining one of the few microbes positively identified as affecting drugs: Eggerthella lenta. Eggerthella, identified in the 1980s, has been shown to render the heart drug digoxin inactive.

“This is one of the few cases where we’ve identified the actual member of the gut community doing this,” Haiser said. “We’re delving deeper, looking at how the microbe is doing this, what the conditions are that affect its ability to do this.”

Haiser is working on the project with David Gootenberg ’11, who will start at Harvard Medical School in the fall. Gootenberg is trying to figure out how Eggerthella knows the body is taking the drug, which leads to it expressing the genes responsible for inactivating it.

Gootenberg started in the lab while an undergraduate and said his experience there has helped him understand how important our microbial partners are, something that could inform his future work as a physician.

“That would be very exciting, to understand the mechanisms [of our interactions with microbes] and be able to make decisions regarding human health because of it,” he said.

Jesus Luevano, who will be a senior at Harvard College this fall, is spending his second summer interning in Turnbaugh’s lab, examining the impact of different diets on the gut microbial communities in laboratory mice. In work that has implications for human health and obesity, he’s switching the mice from a low- to a high-fat diet to see the effect on their microbial communities.

Like Gootenberg, Luevano said the experience has taught him various experimental methods and contributed to his growth as a scientist. He hopes the project will lead to his senior thesis.

“It’s really pushed me to learn as a researcher,” Luevano said.