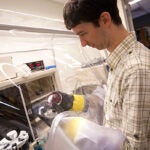 A heart attack doesn’t just damage heart muscle tissue by cutting off its blood supply, it also sets off an inflammatory cascade that worsens underlying atherosclerosis, actively increasing the risk for a future heart attack. These findings from a study receiving advance online publication in the journal Nature suggest an important new therapeutic strategy for preventing heart attacks and strokes, both of which are caused when atherosclerotic plaques rupture and block important blood vessels.

“We have known for a long time that heart attack patients are at increased risk for a second heart attack or a stroke, and now we know why,” says Matthias Nahrendorf of the Center for Systems Biology at Harvard-affiliated Massachusetts General Hospital (MGH). Nahrendorf, assistant professor of radiology at Harvard Medical School (HMS), is the senior author of the report from a team of researchers from the United States, Canada, Germany, and the Netherlands. “The immune response to the infarct — tissue damaged by lack of oxygen — can accelerate the underlying disease by actually increasing the size and inflammation of the atherosclerotic plaque.”

The study was designed to test the hypothesis that systemic inflammation caused by heart muscle damage would worsen pre-existing atherosclerosis. Using a mouse model genetically programmed to develop atherosclerosis, the researchers conducted a series of experiments showing that experimentally induced heart attacks led to the following:

“The ancient fight-or-flight responses to injury stimulate immune cell activities that are involved in wound healing. But when the ‘wound’ is in the heart and caused by atherosclerosis, that increased activity actually accelerates the underlying disease,” Nahrendorf explains. “While most of this work was done in mice, we have hints that something similar may happen in human patients — for example, we found increased numbers of blood stem cells in the spleens of patients who had died shortly after a heart attack.????

Ralph Weissleder, professor of systems biology and of radiology at HMS and director of the MGH Center for Systems Biology, adds that these findings set the stage for a totally novel approach to cardiovascular disease. Therapies directed to the sites of white blood cell production, including the bone marrow or the spleen, may be able to prevent immune-system exacerbation of atherosclerosis.

“This gives us potential new therapeutic targets that we had not thought about before. Clinically, we focus on reducing risk factors such as elevated cholesterol and blood pressure, but not inflammation. We hope our work can help change that,” Weissleder says.

Co-lead authors of the Nature paper are Partha Dutta and Gabriel Courties of the MGH Center for Systems Biology. Collaborators include Filip Swirski of the Center for Systems Biology and Peter Libby, chief of cardiology at Harvard-affiliated Brigham and Women’s Hospital, where the clinical data were analyzed. The study was primarily supported by grants from the National Institutes of Health.