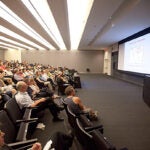 Life lessons from an old worm

The renovated Fishes Gallery in the Harvard Museum of Natural History (HMNH) replaces a 50-year-old space that school kids used to race through to get to more modern displays and that, in effect, left a fish-shaped hole in the museum’s collections.

“The old gallery was horrendous,” said George Lauder, the Bigelow Professor of Ichthyology and curator of ichthyology in Harvard’s Museum of Comparative Zoology (MCZ), one of the three research museums that make up the HMNH. “It was really kind of pathetic.”

The new gallery, which opened June 2, updates the old in every way, with refurbished cabinets, better lighting, new specimens, and displays that explain both fish biology and the science being conducted on the topic at Harvard. The work was done in honor of Karel Liem, curator of ichthyology at Harvard from 1972 to 2009, who died in 2009 and to whom Lauder credited much of the expansion of Harvard’s fish collections, which grew from roughly 200,000 specimens in the 1960s to some 1.5 million today.

Liem “played an instrumental role in modernizing fish research at Harvard,” Lauder said during a lecture celebrating the new gallery on Thursday at the Geological Lecture Hall.

The MCZ’s fish collection, Lauder said, is an important tool for researchers. It contains specimens that date to the 1790s and includes a fish collected in Concord in 1859 by Henry David Thoreau. Using the collections, Lauder said, researchers can, for example, test tissues from specimens collected at the same place in different years to see if and when poisons such as mercury are present.

Lauder talked about collecting specimens at the Charles River, which provides a way to introduce students to fieldwork and also allows Lauder to see the status of a river that was horribly polluted as long ago as the 1800s. Today, he said, the river is much improved and students have collected eels, bass, sunfish, herring, and suckers. One group that might have been better represented despite the pollution a century ago is migratory fish, whose run up the Charles is blocked by the dam on which the Museum of Science sits.

Before the talk, Lauder walked through the gallery as finishing touches were being applied. He pointed out large displays on the evolution of fish and of the major groups, including cartilaginous fish such as sharks and rays and the ray-finned fishes — what most people think of when they hear the word “fish” — whose dramatic evolutionary radiation make them the most diverse group of vertebrates on Earth.

The displays include several examples of that diversity, including a large specimen of a South American arapaima, 88 inches long, next to a specimen of its skeleton. The arapaima is notable for its status as one of the world’s largest freshwater fish, its aggressive feeding on other fish, and because it breathes air.

The exhibit includes displays on the ecology of fish, including their migratory habits, some of which are truly epic, like the unusual life cycle of eels, which are born in the Atlantic’s Sargasso Sea and then migrate to freshwater homes in North America and Europe.

Lauder in the lecture touched on his recent research on sharkskin, which debunked claims by certain swimsuit manufacturers that they’d created sharkskin-like suits.

Sharks are cartilaginous fishes, meaning their skeletons are made not of bone, but of cartilage, the same hard, yet flexible material that makes up human noses and ears. Despite the makeup of their skeletons, sharks aren’t devoid of bone; in fact, they’re covered by it. True sharkskin is made up of toothlike denticles that Lauder’s research shows increase speed through water by 12.3 percent.

Lauder arrived at that figure through experiments using sharkskin and comparing it with skin that had been sanded to remove the toothy scales. Similar experiments on the latest full-body swimsuits showed that the suits’ surface — with tiny dents in the fabric – does not resemble sharkskin, and, when compared against a similar material without the dents, has no effect on swimming speed and can even retard it. Lauder concluded that manufacturers’ claims of an increased swimming speed, which appeared to be true, were a product of the tight suits’ effect on wearers’ bodies and not to a likeness with sharkskin.

Lauder’s work on fish robotics is also on display in the refurbished gallery. He said his goal is to understand fish propulsion enough to replace loud, propeller-driven craft with robots that mimic how fish swim, which would be better able to observe sea life without the disruption of modern submersibles.

Mimicking fish locomotion is no easy task, however. The bony rays that support fish fins are attached to muscles that allow a fish to move them independently. This means that a fish fin is not a fixed structure like an airplane wing, but rather an extremely complex tool that a fish can bend and flex in many different ways to help it move through its environment.

Robotics is a great way to study how fish move, Lauder said, because fish don’t always cooperate in experiments. Using robotics, however, a researcher seeking to mimic fish locomotion can test different hypotheses that they can’t on living fish.