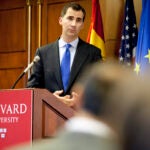 If current trends continue, the death penalty may be eliminated worldwide as early as 2026.

That’s according to a visiting fellow at Harvard. “It’s not a feel-good topic,” said Christof Heyns during a panel on Monday. “But it is also not simply gloom and doom.”

Heyns was among six experts who participated in “The Death Penalty: Hanging by a Thread,” a conversation about the global fate of what he called “systematic and organized violence by the state.” The event, in a packed classroom in Griswold Hall, was co-sponsored by the Harvard Law School Human Rights Program and Amnesty International USA. It came on day one of a two-day international conference on the death penalty at Harvard Law School (HLS).

Heyns, a South African legal scholar and human rights activist, is a visiting fellow at HLS, and the United Nations special rapporteur on extrajudicial, summary or arbitrary executions. In October, he will submit a report on worldwide death penalty trends to the General Assembly.

Another panelist, University of Middlesex (London) legal scholar William A. Schabas, affirmed the worldwide downward trend in death penalty usage. About 40 nation-states — a fifth of the world’s total — still have provisions for the death penalty, he said, but in the past year only 20 have carried out executions. In the past 35 years, Schabas estimated, two or three nation-states a year have either abolished the death penalty or ceased to use it.

In the United States, the death penalty is in decline as well, said Carol Steiker, the Henry J. Friendly Professor of Law and Harvard Law School’s special adviser for public service. Annual executions have dropped from about 100 to 50 in 10 years.

For one, Steiker said, there is an increasing sense of the fallibility of evidence, including the place of DNA in what some lawyers call “the innocence revolution.”

It is better, perhaps, to simply let such laws be “hollowed out,” state by state, said Steiker. She cited recent laws, ballot initiatives, legislation, and moratoriums in California, Oregon, Montana, Colorado, Kentucky, and New Hampshire.
The panel addressed another issue: Is the death penalty a form of torture?  Yes, said Juan Méndez. The American University legal scholar, a native of Argentina, is the U.N.’s special rapporteur on torture and other cruel, inhuman or degrading treatment or punishment. Like Heyns, he will submit a report on the death penalty to the General Assembly in October.

Three issues are in play, said Méndez. Methods of execution, which are “never painless”; the “violation” of the death row experience, which includes “the anxiety of having to wait indefinitely”; and human dignity itself — the necessity to bring “moral terms” to international law.

During his days as a young lawyer in Argentina, Méndez represented political prisoners. He was arrested, tortured, imprisoned, then expelled in 1977. But this era is different, especially regarding the death penalty, he said. “The legal culture in Latin America is very abolitionist.”

The same is true of the Caribbean, where the death penalty is often on the books, but rarely applied — a state of “de facto non-enforcement,” said Lloyd Barnett, a legal scholar and practicing attorney in Jamaica and a member of the Inter-American Institute of Human Rights.

In the English-speaking Caribbean the death penalty was once routine, said Barnett. Today, judicial — not legislative — moves limit the number of executions. Among them are a limitation of five years on death row; guarantees of fair trial and due process; a ban on mandatory death sentences; and limiting the death penalty to murder. An execution has to come after “the worst of the worst of the cases,” said Barnett.

Schabas outlined the geography of death penalty declines. In the United States, executions are regional, and happen in fewer and fewer states. Except for Belarus — “a bad neighbor,” he said — Europe has been abolitionist for generations. Once-staunch death penalty states have abolished it, including South Africa (1995) and Russia (1996). Public opinion is shifting in China, said Schabas, and most of Africa is now “a great success story.”

Conference participant Livingstone Sewanyana, executive director of the Foundation for Human Rights Initiative in Uganda, said advances in his nation include a “three-year rule” for execution after a sentence of death. After that, he said, the penalty becomes life in prison.

But there are still “dark spots” in the world, said Schabas, including North Korea and the crescent of nations comprising Iran, Iraq, and Saudi Arabia.

There are 500 to 600 executions a year in Iran, and there have been more than 10,000 since 1979. But 85 percent of these executions in Iran are related to drug offenses — a fact that critics of the death penalty find especially troubling. According to UK-based Harm Reduction International, 32 states or territories in the world provide for drug-related executions. But only a few apply the law aggressively, including Iran, Yemen, Kuwait, Singapore, Vietnam, and Malaysia.

The U.N.’s Human Rights Committee is charged with monitoring the 1966 International Covenant on Civil and Political Rights. Article 6 calls for every human being to have “an inherent right to life” — but also leaves a loophole open for death penalties decided by “a competent court.”

“We can’t say, per se, the death penalty is wrong,” said committee member (and panelist) Nigel Rodley of the University of Essex. But at the same time, Article 6 is “essentially abolitionist,” he said, since it upholds the right to life.

The death penalty was once widely regarded as “a question of domestic penal policy,” said Rodley — but today “it’s a human rights matter.”