A Nobel cause in the Arab world 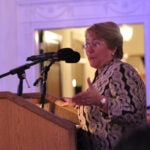 A meeting of ministerial minds

Tawakkol Karman didn’t make history in the Arab Spring by being shy about her demands.

At Harvard Kennedy School (HKS), the Nobel Prize–winning activist and journalist — who led the protests that ultimately ousted Yemen’s autocratic president, Ali Abudullah Saleh — called on the United States and other powerful nations to take up the democratic cause that she and others across the Middle East and North Africa have championed.

“Western support for the Arab revolutions until today is still insufficient and less than anticipated or expected,” Karman told a packed room at the John F. Kennedy Jr. Forum on June 7, in the keynote address of the Center for Public Leadership’s conference “Culture, Identity, and Change in the Middle East: Insights for Conflict and Negotiation.”

“Humanitarian intervention is righteous and necessary,” she said through a translator. “This support begins by severing the relationships with tyrannical and corrupt regimes, while simultaneously acknowledging and accepting these revolutions and their strength, and providing all the necessary political and logistical support for the revolutions.”

Last year, at 32, Karman became the youngest recipient of the Nobel Peace Prize in the award’s history, as well as the first Arab woman to receive the honor. (She shared the prize with former Liberian President Ellen Johnson Sirleaf and Liberian activist Leymah Gbowee for their contributions to the safety of women and to female participation in peace-building.)

“She has been dubbed the Yemeni Joan of Arc, but at home she is known as the mother of the revolution,” said Hannah Riley Bowles, associate professor of public policy at HKS, who introduced Karman as “the type of person our world needs so desperately today.”

Though Karman seemed a bit nervous at first, her trademark fieriness soon emerged. Frustrated by her translator, Karman replaced her halfway through and plucked Hadyah Fathalla, an M.P.A. student at HKS, from the crowd to do the job instead. (“I want the soul of my speech to reach the people,” explained Karman, who intermittently delivered remarks in English, a language she only recently began to learn.)

She detailed her long journey to promote democratic reforms in Yemen, which she began in 2007 by organizing weekly protests in the streets. Supporters coalesced around Karman, the revolution’s de facto leader, in January 2011 when the Arab Spring movement swept the region.

“In these countries, people suffer from unemployment, and a lack of many more requirements to live their lives in a free and respectful manner,” Karman said. The protests appealed to those who were “searching for a free life with the dignity that had not been written for them at the time — and if not for them, then for their children or generations to come.”

Their peaceful protests have come at a cost, including for Karman, who has been arrested and detained twice since the uprisings began.

“We pay a lot for that — a lot of blood,” she said. “For what? For the values that all of us carry: dignity, freedom, democracy, equal citizenship, transparency, accountability, rule of law.”

Those ideals have long been in short supply in Yemen and its neighboring countries. Arab dictators’ governments exist merely to protect and enhance those currently in power, she said. Likewise, military services are organized to reinforce the regime’s legitimacy through unlawful detention, torture, and abduction of citizens.

“The old regimes used the old style, which is divide and rule,” she said. Protesters, on the other hand, refused to be divided by “past conflict.”

“When we go to the street, we throw out all our differences,” religious, ethnic, or otherwise, she said, “because we know that the dictatorship doesn’t have any religion.”

She implored Western governments to end their support for some Arab dictators, whom she called “a source of instability all around the world,” and to use force if absolutely necessary to remove them from power.

The West need not fear that the protesters will turn violent, she said.

“This spirit of the youth that was capable of bringing down the [regime in Yemen] is also capable of sustaining development and sustaining political stability,” she said. Karman was adamant that the revolutionaries, if given power, would be able to effectively contain terrorism, despite America’s misgivings.

“The fear of terrorism is misplaced,” she said. “Terrorism and tyranny are two faces of the same coin. … They both feed off each other’s strength.”

“Terrorism has killed Yemenis, has destroyed the economy, has ruined [Yemen’s] reputation,” she argued. “Terrorism has only prolonged the life and rule of al-Saleh.”

As for any responsibility she bears for bringing women into the Arab world’s unprecedented political revolutions, Karman stressed that the rights of her gender were indistinguishable from her larger cause.

“You have to be human, not just [a] woman,” Karman said in English. “I decided to [not] ask anybody to give me my rights. We decided to take our rights by going to the street, doing demonstrations, sit-ins, sacrificing, leading women. And then we will give men their rights.”