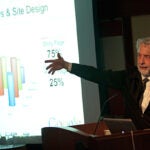 Owen explores the rise and fall of Arab ‘presidents for life’

Long before the Arab republics in the Middle East and North Africa grabbed the world’s attention with inspiring democratic protests, they shared another curious political reality: leaders who, despite having been “elected,” claimed power like kings.

By the end of 2010, Roger Owen, A.J. Meyer Professor of Middle East History, thought he was almost finished with his book on the phenomenon of these “presidents for life.”

He soon learned how wrong he was. What began as a single fruit vendor’s act of self-immolation in Tunisia in December 2010 soon turned into a nationwide protest that spread like wildfire to neighboring Arab nations. At the same time, the website WikiLeaks’ release of a trove of diplomatic cables — including many from the American ambassador in Libya — provided insights into the region’s notoriously secretive regimes.

“Suddenly, my book looked as though it was hideously out of date,” Owen said in a talk at the Center for Middle Eastern Studies on Thursday. He delayed publication to add an analysis of the political uprisings, which thus far have successfully overthrown rulers in Egypt, Tunisia, and Libya.

What Owen found was that the dictators’ strength — their ability to share strategies for remaining in power over the decades — had been turned against them, bringing them under the same pressure to resign in their long-suffering countries.

“There’s a clubbiness about these dictators,” Owen said in discussing “The Rise and Fall of Arab Presidents for Life,” which was released this month. “They learned from each other, and they egged each other on, and now it’s going the other way. The anti-dictatorial forces have learned something” from them.

“I think we can say, in light of the Arab Spring, that these monarchical regimes brought on their own destruction,” he said.

Still, Owen’s book, and his lecture, focused more on the rise of such presidents than their fall — and for good reason. These leaders, from the bureaucratic Hosni Mubarak in Egypt to the brutal Moammar Gadhafi in Libya, provided fascinating insight into the ways that entire governments came to be embodied in individuals.

Post-colonial countries like those in the Middle East and North Africa, which have both “a desire to protect sovereignty and a desire to have security,” are particularly susceptible to dictatorial rule, Owen said.

“The newly independent states place an enormous premium on unity,” he said. “They thought division had led to problems before. …You had to pretend that everybody was on the same page, and that the only people who were making trouble were agents of foreign powers.”

That strategy required keeping up appearances of absolute authority, even as some presidents grew old and frail. Mubarak’s health became a state secret; at least one journalist was put in prison for suggesting that the Egyptian president underwent an operation for cancer. In researching the book, Owen and his students became “briefly obsessed” with Tunisian President Zine el-Abidine Ben Ali’s hair, which looked like “it had been imported from [Silvio] Berlusconi’s hairdresser,” Owen joked, referencing the slick former Italian prime minister’s ’do.

“The one thing they could not reveal was that they were getting old,” Owen said, because the presidents feared any inkling of their future death would agitate the population.

Over time, Owen said, Arab dictators created “mirror states,” systems that mirrored their beliefs and served to reinforce their centrality and authority.

Gadhafi’s sons, for example, had an interest in keeping him calm to prevent him from ordering a dangerous attack, Owen said. Up until the day he was captured by rebels and killed, Gadhafi believed that his people loved him. Recently, Bashar al-Assad, who remains in power in Syria, claimed he has faced no real domestic opposition to his rule despite more than a year of unrest.

“It was not in their worldview that there could be real citizens, not just foreign agitators or Zionist agents or terrorists,” who would want them to step down, Owen said.

Even without protests spurred by widespread poverty, unemployment, and inequality, such presidents faced a natural deadline on their rule. Many have wrestled with the idea of succession, Owen said. But why would those countries allow their presidents to adopt the airs of a monarch — from grooming their sons for power to abandoning their modest presidential estates for sumptuous palaces?

“Everybody knows the rules of the game in a monarchy,” Owen said. “That’s probably one reason why the monarchs have survived as well as they have [in other parts of the Middle East]. I think monarchy is much easier to understand.”

Indeed, he said, the constitutional drafting process currently under way in some of the Arab nations is proving just how difficult it is to express the voice of the people without falling into chaos — or back into a pattern of heavy-handed rule. Even two centuries later, America’s example is hardly as enlightening as we’d like to believe, Owen said.

“How do you get to a stage where 25 white men produce a document that says, ‘We the people’?” he wondered. “There’s a trick involved in how we do that.”