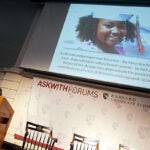 Getting students to enroll, stay in college

Poor often have too many basic choices, which can sap their resources, energy

Many public policies are paternalistic. They come with strings intended to save people from themselves, such as laws requiring helmets for motorcyclists and prohibiting buying alcohol with food stamps. But Esther Duflo, a development economist at Massachusetts Institute of Technology (MIT), said during the year’s first Tanner Lecture on Wednesday that the world’s rich prosper in part because they have less freedom to choose how to attain basic comforts.

Duflo, who in 2003 co-founded the Abdul Latif Jameel Poverty Action Lab (J-Pal) at MIT, said that, historically, assisting poor people has taken the form of charity, providing intermittent aid without consulting them about what they need. That has led to mistrust and little progress, she said. On the right, the notion of aid to the poor has taken the form of libertarian paternalism, that individuals are freer if they have more choice.

But the rich benefit from a paternalism that offers them clean water and public health safeguards such as immunization against disease as a default. They don’t have to seek out these mainstays of modern industrialized life. That also means the rich are less likely to make mistakes that pose life-threatening health risks, she said.

“The emphasis on self-reliance can go too far,” Duflo said. “When you create the conditions where the basic constraints are more or less automatic, you give freedom, not take it away.”

Duflo is the rare economist to be selected to give the Tanner Lectures at Harvard, said Harvard President Drew Faust. Harvard is one of nine universities in the United States and the United Kingdom that annually host the Tanner Lectures on Human Values, which Faust called one of Harvard’s “outstanding intellectual traditions.”

Duflo has gained renown for her trailblazing work as a development economist applying randomized experiments through J-Pal. Such use of randomized experiments, best known for their initial use in drug trials, has drawn criticism from colleagues, including Angus Deaton of Princeton. Deaton and Nobel Laureate Amartya Sen, Harvard’s Thomas W. Lamont University Professor and professor of economics and philosophy, were on hand to respond to Duflo’s lecture Wednesday. She also spoke on Thursday and Friday.

Duflo, 39, who completed her Ph.D. in economics at MIT in 1999, has received numerous academic honors and prizes, including the David N. Kershaw Award, the John Bates Clark Medal for the best economist in America under 40, and a MacArthur “genius” fellowship. She approaches poverty as a problem that can be solved.

What her research in India and other developing countries has shown is that too much choice about everyday needs, such as whether to boil water or trust the government to immunize children continually, imperils the poor. If your basic health relies on your remembering to boil the water, you are not more free, she said.

“You might manage to always boil your water and not get sick. But you have spent so much time and energy boiling water, you will no longer have the energy to do anything else,” she said.

Chlorine is easily available in Africa, she said, but its purchase is sensitive to price. If people are waiting for the price to be low and they have to go buy the chlorine, it is easy to stumble and wind up drinking unpurified water and getting sick. That’s why the simple change of supplying free chlorine and locating it next to water sources would improve the lives of many poor Africans, Duflo said.

“In Boston, I would have to go on a camping trip to drink unchlorinated water,” she said. “In both senses, the rich are subject to a more paternalistic policy than the poor. Does that make them less free?” she asked.

If basic services were provided to the poor as they are to the rich, the poor would be able to focus on higher concerns such as work.

“Without basic capabilities such as health and the capacity to achieve good nutritional status, one is not free.”

Duflo said research has shown that “choosing is not cost-less, it takes time, effort, energy, and stress. People don’t like to choose among many options.” Poor people have too much freedom if they have to juggle multiple jobs plus choices in how to meet their basic needs. That requires more effort than the rich are required to spend.

“The problem,” she said, “is not that people make the wrong choice but that they spend too much time pondering their choices.”