Driving toward the future 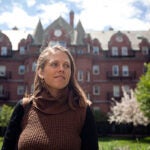 On a speedway as well as in academics, Patrick Staropoli takes the lead

Patrick Staropoli ’12 has a lot of drive. In four years at Harvard College, hard work and determination propelled him to a 3.94 grade point average and earned him a place in Phi Beta Kappa, as well as in the lab of leading Harvard Medical School (HMS) neuroscientist Robert Stickgold. But when folks in Staropoli’s home state of Florida talk about his drive, they’re usually not referring to his academic achievements.

“I race super late-model cars,” says the Fort Lauderdale native. “If you were to rank my touring series, we’d probably be about two steps lower than NASCAR. It’s definitely at a professional level. A lot of NASCAR teams have development teams here to bring up the next generation of drivers.”

Staropoli doesn’t just race; he wins. Since joining the super late-model series, the Mather House resident has won four races and finished in the top five 10 times. He took his first victory lap of 2012 at Auburndale, Fla., in March in only his second race of the year.

Staropoli inherited his passion for fast cars from his grandfather, Nick Staropoli Sr., who raced in New York state, and from his father, Nick Staropoli Jr., who moved the family to Florida and raced super late-model cars at Hialeah Speedway and other venues. Staropoli said his parents started bringing him to his dad’s races when he was 6 months old. He started helping out with the race team while still a boy and, around the time that his father stopped racing in 2001, started driving go-karts competitively himself. That’s when his dad made a deal with him.

“I had to get good grades in school to keep racing,” he said. “I was 13. I was always motivated to do well in school. So in middle school and high school, I kept my end of the bargain, and got to keep racing.”

Spurred by the dream of being a race team engineer for NASCAR, Staropoli developed an interest in the math and science that he needed to work on high-performance vehicles. The career ambition drove him to the top of his class at Plantation High School and into Harvard Yard.

Shortly after he arrived in Cambridge, though, the recession hit. The racing industry, like so many others, went into a slump. Staropoli realized not only that his chances of working on a NASCAR team were slim, but also that his interest in engineering didn’t extend beyond the speedway. Looking for a new academic and career path during his sophomore year, he sat in on a panel for prospective neurobiology concentrators.

“I was pretty interested,” he said. “They had people who majored in neurobiology and went on to different fields. One was a doctor. Another was a researcher. Someone else was in advertising, I think, and they talked about how the field influenced their career. I saw that I could do a bunch of different things. I went home for Winter Break, came back, and changed my concentration from engineering to neurobiology.”

Since then, Staropoli has worked with Stickgold, one of the world’s leading researchers on cognition, sleep, and dreams.

“We ask subjects to play the game ‘Dance, Dance, Revolution,’” Staropoli said. “We wake them up after a period of rapid eye movement (REM) sleep, and have them tell us what they were dreaming about, then go back to sleep. Elements of the game show up in their dreams, particularly during sleep onset. So now, when I dream, I try to find certain parts of it that make me think ‘Hey! That happened to me yesterday!’ I’m more cognizant now.”

Staropoli also gives back to the community. He has worked with Unite for Sight, a nonprofit organization that provides eye care to underprivileged patients around the world.

“The people we meet might not get care if we didn’t come into the community and deliver it,” he said. “I was amazed at how many people are unaware that they even have vision problems. The change is so gradual that they don’t know they have a problem. It’s even more amazing to see how things turn around for them when they get the problem fixed. It changes the way they view the world around them, and even their relationships with people.”

Staropoli has been admitted to several medical schools, but doesn’t yet know which one he’ll attend in September. Still, he says, he plans to continue racing.