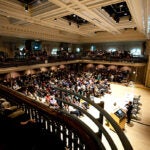 'We are in the beginnings of a renaissance in journalism'

Media moguls viewed the iPad not as a revolutionary gadget, but a time machine with a square, tabloid shape and apps that would allow them to recapture lost subscribers.

Instead, newspapers and magazines now grapple with clunky pay walls and their circulation remains in freefall, as the mainstream media struggle with the dizzying pace of change in the Internet age. The iPad disrupted the news business. People used the apps on it to get their news from Facebook or Google+.

“It’s important we focus on the future, not the past,” warned Richard Gingras, head of news products for Google. “We can’t reverse time.”

Gingras came to the Nieman Foundation for Journalism at Harvard Friday not as doomsayer from Silicon Valley to predict the demise of the news business, but rather to foresee a bright future.

“I do feel these are extraordinary times,” Gingras said. “We are in the beginnings of a renaissance in journalism.”

Focusing on newspapers, Gingras said that they need to toss out the concept of editions. A newspaper website needs to look more like a Wikipedia page — continuously updated by a single reporter and editor with a single URL.

“A story with its own URL goes into the archive and we used to call that the morgue,” Gingras said.

As readers click from social media to straight stories, websites should focus on the design of the story page, not the home page, Gingras said.

Computational journalism will become a larger part of storytelling. Gingras suggested municipal and other databases created for one story could automatically be maintained and serve to spawn future series. Data-driven stories will be more prevalent as an increasing number of students graduate with journalism and computer science degrees, Gingras said.

In the Internet age, reporters will face increased demands and need more than just a pen and spiral notebook in the field, Gingras reckoned. “We should rethink not only about the site but the reporter’s tools,” Gingras added.

As papers and reporters change, organizational roles must be reconsidered, too.

But the biggest change has to be sweeping, as news businesses reconsider their entire mission — what works and what doesn’t — in a race for survival.

Gingras said newspapers are burdened by always doing things a certain way while competing against companies without baggage.

“These were models that barely changed in 100 years — what, they added color? So people didn’t have a reason to evolve,” Gingras said. “You now have people on the outside looking at the problem with a clean slate.”

Gingras was a pioneer in online media, helping create an interactive broadcast teletext news magazine in 1979. He worked at Apple Computer, Google, and until July 2011 was CEO of Salon Media Group before returning to Google. As a member of Google’s board, Gingras also has been active in the development of new products, technologies, and companies.

A “technologist” rather than a reporter, Gingras said news companies must embrace a culture of change. They can’t, like the some media titans did with the iPad, expect to recapture the past.

“First it was about search, then about blogs, then about social [media] — what will it be three years from now?” Gingras said. “The pace of change continues.”