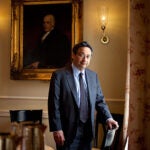 In support of the generalist

It’s the mark of a successful conference that “we have many more questions, perhaps than we had when we came in,” said Lizabeth Cohen, dean of the Radcliffe Institute for Advanced Study, at the conclusion of the institute’s “Women Making Democracy” symposium last week. But one question, she noted, had been answered.

Cohen referenced the image on the event’s poster: that of a woman with her hair covered, flashing the peace sign with both hands and smiling broadly.

“We were attracted to that image,” said Cohen, “not because we knew who the woman was, but we felt that she conveyed the powers, the fears, the hopes, the potential of women making democracy.”

Thanks to an audience member, organizers learned the photo was of Malalai Joya, a member of Afghanistan’s national assembly who was suspended for declaring that the governing body was ruled “largely by criminals and by warlords.”

When asked why, amid death threats, she still fights for change in the country, Joya, said Cohen, replied, “You can cut the flower, but you can’t stop the coming of spring.”

That message was repeated throughout the Radcliffe event, but it was delivered with a note of caution from several speakers who acknowledged that women in the Arab world still have a long and difficult fight ahead of them as they strive for equality.

Since 2003, the annual conference has delved into the connections between women and complex matters of war, law, food, religion, and the developing world. This year scholars, journalists, and activists gathered to examine a timely topic: the role of women in movements for democratic change.

For many, the most enduring image of the Arab Spring is of the demonstrations in Egypt’s Tahrir Square, the public plaza where young and old, men and women, stood together and demanded the resignation of Hosni Mubarak.

But the role that women played in the country’s revolution and their efforts to help chart its future has come at a violent price. Sexual harassment of women has been on the increase, said Egyptian journalist Shahira Amin, a “result of the growing public anger over unmet expectations since the uprising.”

Last year a top military official admitted that “virginity checks” of detained female protesters had been performed, and in many parts of the country female genital mutilation is still common. Women also face challenges in parliament, said Amin, where a law that reserved 64 seats for women was thrown out in 2010, and where 70 percent of the seats are occupied by Islamists who, many women fear, will interpret Sharia — Islamic canonical law — in a way as to deny them their rights.

But despite that gloomy picture, Amin, who delivered the event’s keynote address, was hopeful.

“They will not be pushed back in the shadows, I have seen that firsthand because I was there at all these women’s rallies. … I know that they will be out there fighting for their rights.”

Last year, when a woman was stripped and attacked by members of the military for protesting their rule, thousands of men and women marched in the streets to denounce the military’s violent treatment of women.

Next month’s presidential elections will include the nation’s first female candidate, said Amin, who noted that women are flexing their political muscle in Egypt in greater numbers than any time in history.

“In earlier elections, women were just not interested in politics at all, but now every single one of my friends, even the housewives, is joining a political party. They all want to be part of this process. They don’t want to be left out. So I am really, really very optimistic.”

The first day of the two-day event included a staged reading of playwright Ibrahim El-Husseini’s “Commedia Al-Ahzaan” (“A Comedy of Sorrow”), inspired by events in Egypt.

In a morning panel on the second day — “Public Places, Alternative Spaces” — a group of scholars examined the space that women in the Arab world have claimed and reclaimed as they fight for equal footing with men. Those diverse spaces, they said, can be as intimate as the private home, or as open as a public square or a virtual reality.

Four forms of “solidarities” — networks based on kin and religion, and those forged by women’s associations, and recent public demonstrations inspired by the Arab Spring — are important places of protest and unity for women in Tunisia, said Nadje al-Ali, a professor of gender studies at the University of London. But some of those spaces, she added, will likely disappear.

“As often in the turmoil of revolutions, multiple identities and solidarities coexist,” sometimes peacefully, at other times in tension with each other, said al-Ali. “Only the future will tell us which will prevail.”

In the virtual realm, the introduction of technology has led not only to unprecedented levels of participation by women in the political sphere, but also to a fundamental realignment of male-female family dynamics said Philip N. Howard, an associate professor of communication at the University of Washington.

He cited his research involving 20 families in Tunis, Beirut, and Cairo that studied how the arrival of the home’s first computer became “the moment for organizational restructuring.”

The men ultimately had to justify why only they or their sons had access to the new technology, he said. Those discussions then led “to important conversations,” about access and fairness, and ultimately to those restrictive rules “fading away over time.”