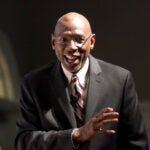 Fighting for education, and nation’s future

At Harvard Law School for honor, Baker recalls service as secretary of state

The key to success for any secretary of state, according to James A. Baker III, is a rock-solid relationship with the commander in chief.

“You need a president who will support you, and defend you, and protect you even when you are wrong. I had that wonderful relationship with [George H. W. Bush],” said Baker, secretary of state from 1989 to 1992. “Nobody was going to get between me and my president.”

The statesman was at Harvard last Thursday to receive the Great Negotiator Award. The annual honor, created by the Program on Negotiation at Harvard Law School, recognizes individuals whose “lifetime achievements in the field of negotiation and dispute resolution have had a significant and lasting impact.”

During a program at Harvard Law School, Baker offered his insight and political perspective on his time as a senior government official for three presidents, a tenure peppered with delicate foreign negotiations.

In a frank conversation with James K. Sebenius, Gordon Donaldson Professor of Business Administration at Harvard Business School, and R. Nicholas Burns, Sultan of Oman Professor of the Practice of International Relations at Harvard Kennedy School, Baker outlined the complexities of his time as the chief foreign affairs official under George H.W. Bush. In the first of a two-part panel he fielded questions about his efforts to help unify Germany after the collapse of the Berlin Wall.

Baker — who was also undersecretary of commerce for Gerald Ford, and secretary of the treasury for Ronald Reagan — acknowledged that the fall of the Berlin Wall caught many observers offguard.  But if the U.S. government was surprised by the rapid dissolution of the dividing line that separated East from West in geography and ideology, it was far from unprepared, he said.

As early as May 1989 — six months ahead of time — the State Department was busy compiling information and discussing possible scenarios if the wall came down. When it did, officials were ready to engage in a delicate balancing act that involved Germany as well as its European and Soviet neighbors, said Baker.

Not only did they have to contend with “the objection of the Soviet Union,” he said, they also faced grave concerns from the leaders of France and Great Britain who had suffered at the hands of Germany during two world wars.

“They were really wary of unifying Germany,” said Baker. ‘They were worried that history might repeat itself.”

Baker said the United States worried too about a unified and neutral Germany potentially “leaning eastward.”

To appease all parties, Baker and his team devised the Two Plus Four Agreement, which gave East and West Germany control of the internal aspects of their unification. “The four occupying powers, France, Great Britain, the Soviet Union, and the United States,” Baker said, “would handle the external aspects.”

Later, at a Camp David meeting, German Chancellor Helmut Kohl met with Baker and President Bush. Together they agreed that a unified Germany would become part of the North Atlantic Treaty Organization (NATO) and that the United States would agree to a special arrangement with respect to the stationing of troops on former East German soil.

President Bush, said Baker, told Kohl: “Helmut, I am going to be with you on this, provided you are with us on unified Germany as a member” of NATO.

“Helmut Kohl gave us his word,” said Baker, “and his word was good.”

Baker’s tips on great negotiating included the importance of developing an understanding of “the political constraints,” on the person across the table. “If you can understand those, then you can work with them.”

Baker said the experience of running five presidential campaigns helped sharpen his negotiating skills, and that trust has been essential to his career. He recalled his relationship with former Israeli Prime Minister Yitzhak Shamir and their policy disagreements.

“We respected each other, we liked each other. He was the one leader who would never leave. We held all our meetings with no note takers. … If you can build a relationship of trust with your interlocutor, you’ve got a lot better chance of making a deal.”

Baker credited George H.W. Bush’s keen understanding of foreign affairs with his deft handling of German reunification. Bush had been the head of the CIA and ambassador to China and “was smart enough to understand” the political complexities that ensued as the wall tumbled, said Baker.

Bush refused to gloat, Baker said. Instead the president realized there was still “a lot of business to do with [Mikhail] Gorbachev and [Eduard] Shevardnadze,” two leading Soviet statesmen during the Cold War.

Bush, Baker recalled, told reporters during a press conference, “We are not going to dance on the ruins of the wall.”