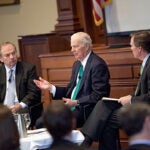 Are there lessons for leading a classroom in professional football? Plenty, according to experts on a Harvard panel, who among other things suggested educators should study the team dynamics of the National Football League (NFL).

“If one person blows their assignment, the game is shot. It very much relates to the relationship between teacher and student, and between teacher and teacher . . . [everyone] is dependent on one another’s success,” said Domonique Foxworth, president of the NFL Players Association and former cornerback with the Baltimore Ravens, who urged school administrators to consider the creation of teaching teams.

A team-oriented approach to teaching, one that encourages educators to think about the success of a student well beyond the year they spend in a particular classroom, is a vital part of education, agreed panelist Tim Daly, president of the education nonprofit TNTP, which addresses issues of teacher quality.

“Teachers who take that long view” are critically important, he said. “It’s the kind of thing that doesn’t get talked about.”

“Welcome to Monday Night Football,” said Harvard Graduate School of Education Dean Kathleen McCartney to the crowd at Longfellow Hall on April 2, introducing members of the NFL and the education sector who took part in the Askwith Forum.

The idea for the event took shape last year, said moderator Andy Rotherham, co-founder of Bellwether Education Partners and education columnist for Time magazine, when his editor asked him to develop a column around the Super Bowl. He did, and in the process realized there was much more to say.

One important method of NFL coaching that can be applied to teaching is the use of video to assess player performance. Experts agree that most teachers receive inadequate feedback on the work they do, with evaluations often consisting of a visit from a principal for a few minutes each year. Not so in the NFL, where obsessive analysis of videotaped training sessions and games are vital to helping players and coaches understand what they do well and what they need help with, said Brendan Daly, defensive line coach for the Minnesota Vikings and brother of Tim.

For Foxworth, studying film was the key to his longevity with the league. “I was successful because the plays that I made were all cerebral; they were plays that I prepared for,” he said. “I recognized they were coming, I saw the keys, and in a split second I was able to make that decision.”

While NFL teams rely on video to improve performance, the majority of the 3.2 million public school teachers in the country have little or no access to video footage of excellent teaching being done by their peers, or of their own teaching, said Tim Daly. “It strikes me that there is a total lack of infrastructure in education,” for this kind of feedback.

“If we want people to be excellent practitioners in the classroom and we want them to know what they are doing,” he said, “we have to invest more in helping them learn these techniques.”

Athleticism is certainly a factor in evaluating talent, but what sets a player apart is his ability to study and learn the game, said Brendan Daly, who is also a former teacher.

We ask ourselves “what is his ability to learn, what is his demeanor toward learning … how is he going to learn, absorb, and understand the game,” he said. “That, in my personal opinion, is the difference between the guys who make it and the guys who don’t.”

The main “nuts and bolts” of teaching is very similar, agreed his brother. “It’s how you prepare for class; it’s how you respond to things when they go wrong. It’s how you learn from your mistakes, and how capable you are of changing.”

He compared a complicated play on the football field to everything that happens in one class.

“A good teacher can tell you all those individual decisions that they are making and why.”

Like the building blocks in education that take a student from learning the letters of the alphabet to forming words and eventually reading a book, football players have to master the fundamentals before moving on to advanced techniques and complicated plays, said Brendan Daly.

“The important thing is to believe in the fundamentals and work toward mastering them.”