Social media, but not just for fun 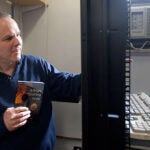 Desiree Goodwin was once a Twitter skeptic. Although hardly Web-phobic, the librarian at the Harvard Graduate School of Design had never thought of social media use as part of her professional life.

Then she took two classes at the Center for Workplace Development (CWD) that changed her mind. While the center is better known for offering classes on traditional professional skills — from Excel proficiency to leadership — more faculty and staff members like Goodwin have been signing up to learn a once-belittled skill set: social media literacy.

“There’s still a kind of mindset that social media is for play, that it’s not something to be taken seriously,” Goodwin said. Now, she said, “I’m glad to have that as part of my arsenal.”

Goodwin, the circulation and reference coordinator at the Frances Loeb Library, now uses Twitter to connect with everyone from fellow librarians to other animal lovers interested in natural pet food. She hopes to help the Loeb Library start social media accounts of its own to get feedback and questions from patrons.

She’s hardly alone. At the institutional level, Harvard is embracing social media in a big way, from its million-strong Facebook following to its increased presence at last month’s South by Southwest Interactive festival. Increasingly, Harvard faculty and staff are making use of 21st-century communication tools as well.

“The concept of social media is so powerful that it is an extremely transferable skill,” said Nicholas Lamphere, a multimedia developer for Harvard Human Resources, who developed and teaches CWD’s social-media courses. Rather than viewing social media as a lunch-hour time suck, more professionals are coming to understand it “as a suite of tools that allow you to glean information, share content, build your networks, and facilitate basic things like event planning, fundraising, or emergency response.”

Whether you’re looking for a new job or simply want to stay connected in your field, it helps to see online social networks as an extension of real-life social networks, said Mikolaj Jan Piskorski, an associate professor of business administration at Harvard Business School who studies how companies utilize such networks.

More than a third of jobs are obtained through social connections, according to Piskorski. “In the online world, all of that gets accelerated,” he said. “All the beneficial effects [of social networks] we knew about before have just been multiplied. It’s exciting.”

Cecil Haverkamp was won over after taking two of CWD’s courses while working as a project manager and curriculum developer at the Harvard School of Public Health.

“I only knew Twitter as the ‘I’m having a sandwich now’ caricature,” said Haverkamp, who now works for the University of Botswana. But he realized that on Twitter, he could actually reduce the time he spent staying up to date on policy and academic papers.

Social media helped with his job change, too. When he found out he would be relocating to Botswana, Haverkamp used LinkedIn to quickly locate a dozen colleagues — people within one or two degrees of his immediate network — with professional experience in the country, whom he then contacted for advice.

While an introductory class at CWD is a good way to learn the ropes of any particular social networking site, Piskorski and Lamphere offer some general suggestions on how to best use social media for professional gain, not drain.