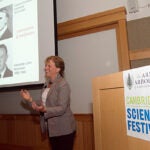 Sharing a passion for science

Jonathan Walton and his young family struggled through their first New England winter after arriving from Southern California in 2010. Walton, who was a new assistant professor at Harvard Divinity School, admitted that he, his wife, Cecily, and then-6-year-old twins felt a bit marooned at their off-campus home as the days grew darker.

“We didn’t know anyone, we had two small children, and it got dark at 4 o’clock in the afternoon,” Walton said. “If it wasn’t for Dorothy [Austin] and Diana [Eck], the Lowell House co-masters, we might have been on a plane back to California.”

Instead, Walton and his family moved into Lowell House, where he became a resident scholar. The family lived in the Master’s Residence in an upstairs apartment equipped with its own entrance. The apartment was separate, but the Waltons were not, sitting for meals in the dining hall, talking Harvard football with students, and taking on all comers on Walton’s PlayStation.

“Living in a House provided a ready-made community,” Walton said. “Getting plugged into House life has been wonderful for all of us.”

Keeping Walton on campus has paid dividends for the University as well. Now a tenured professor of religion and society, Walton was named last week to succeed the late Rev. Peter J. Gomes as minister in the Memorial Church after a yearlong search.

Harvard President Drew Faust, who made the announcement April 25, said she wanted to pick someone who would help celebrate the diversity of spiritual life on campus while maintaining Memorial Church’s central role in that life.

“Professor Walton will bring new life to spirituality and religion at Harvard — as intellectual pursuit and lived experience,” Faust said. “He is among the country’s foremost scholars of African-American religion, a powerful preacher, a thoughtful pastoral presence, and a wonderful human being.”

Effective July 1, Walton will become the Pusey Minister in the Memorial Church and Plummer Professor of Christian Morals, appointments that put Walton, an ordained Baptist minister, in a leadership role in campus religious life. The appointment will also have his family moving again, this time to the Memorial Church minister’s residence, Sparks House.

“I still feel like I’m walking in my sleep, that this is a big dream right now,” Walton said.

Dedicated 80 years ago as a monument to Harvard’s war dead, Memorial Church plays an important role in the University’s ceremonial and spiritual life. It is a gathering spot during times of tragedy, such as after the 2010 Haiti earthquake and the Sept. 11 terrorist attacks. It serves as a backdrop for Commencement, with the stage assembled on the church’s south steps. It also hosts the traditional Baccalaureate Service where Harvard’s president addresses graduating seniors.

After receiving a bachelor’s degree from Morehouse College, Walton attended the Princeton Theological Seminary, where he earned master’s and doctorate degrees. He served as a lecturer at Princeton University from 2003 to 2006 before moving to the University of California, Riverside, where he was an assistant professor.

Walton has performed pastoral duties in addition to his academic work, serving as pastor at Memorial West United Presbyterian Church in Newark, N.J., from 2001 to 2006.

Eck, professor of comparative religion and Indian studies, Fredric Wertham Professor of Law and Psychiatry in Society, and a member of the search committee that selected Walton, described him as vibrant and outgoing, someone who will sit in the dining hall reading — on a Kindle — and talking to students after meals. He’s also a good preacher, she said.

“It’s going to be a new era in Memorial Church,” Eck said. “He brings … a new and exciting ministry.”

Walton’s Lowell House experience has been a long embrace between his family and the House community. Students enthusiastically welcomed the Waltons, he said, and have even kept the twins, Zora and Elijah, busy.

“It’s lovely for a student to be living with families — we’re all far from home,” said Lowell House senior Marina Connelly, who is also a Memorial Church chorus member. Connelly, who talks with Walton regularly on a wide variety of topics, is enthusiastic about his selection. “He’s going to be brilliant, he’s an exciting scholar and preacher.”

Living with Harvard students, Walton said, has helped him understand that, despite perceptions, they’re not all cut from the same cloth.

“What’s been fascinating is the eclectic nature of students here and how interesting they all are, from persons who are differently — though exceptionally — abled, to international students, to those into Keats and John Donne, to those who come to my apartment to get beaten at Madden on the PlayStation,” Walton said. “It’s easy to think of Harvard students as a monolith, but they’re brilliantly peculiar. And that’s a beautiful thing.”

Walton grew up in an Atlanta household where current events, civil rights, and social justice were discussed at the dinner table and where family members — including his great-grandfather and several uncles and cousins — were in the ministry.

“My dining room table was my first and primary classroom,” Walton said. “I saw the ministry as an opportunity to think out loud about the most pressing human questions without losing sight of human needs.”

Walton was drawn to his research specialty — how modern media and technology affect religious communities — because it’s critically important in today’s world and because few scholars were focusing on it. Technology, he said, presents both new ways to reach people and new potential pitfalls. Messages can be distorted, he said, and social networking sites such as Twitter and Facebook can give the impression of closeness without true community.

Despite the dangers, Walton said, modern media is here to stay and should be put to good use, not least because today’s students demand it. Still, maintaining a physical place for community remains important — perhaps even gains importance — because of the rapid change around us, he said.

“We have entered a new world. We cannot send smoke signals in the age of texting and tweeting,” Walton said. “[But] this rate of change is what makes stable communities like Memorial Church more important. …What does it mean to have a place to come and hear a 2,000-year-old message?”