Policing for, and with, the community 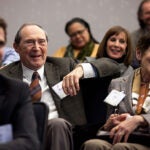 It wasn’t easy being a police chief in the 1980s. Gang violence and drug use haunted American cities. Trust between officers and the public was eroding, a trend that would culminate with the Los Angeles riots in 1992. Meanwhile, research was showing that traditional police tactics — rapid response to crime, detective work — weren’t making communities safer.

At the same time, two important ideas, broken windows theory and community policing, were taking shape at Harvard and would transform the public debate about law enforcement’s role in society.

Their genesis could hardly be more different. The former theory rested on two men’s work; the latter was a result of years of roundtable discussions at Harvard Kennedy School (HKS). But both would help to fundamentally change the philosophy of police work, emphasizing that the safety and needs of the community were just as important as those of the individual.

In March 1982, James Q. Wilson, then Henry Lee Shattuck Professor of Government, and George Kelling, then a fellow at HKS, published a groundbreaking article in The Atlantic Monthly called “Broken Windows.”

Their hypothesis was simple, but it articulated a philosophy of law enforcement that had yet to be named: Disorder in a community, if left unattended, would likely lead to more disorder. They tied up the idea with a neat metaphor: “One unrepaired broken window is a signal that no one cares, and so breaking more windows costs nothing,” they wrote.

They encouraged American police departments, which had long been focused on solving more serious crimes after they occurred, to devote attention to smaller infractions, such as public drunkenness or turnstile jumping in the subways — victimless crimes that nonetheless contribute to an aura of lawlessness and can make a community feel unsafe.

“We must return to our long-abandoned view that the police ought to protect communities as well as individuals,” wrote Wilson, who died March 2 at 80, and Kelling.

The research remains mixed on whether restoring order is directly linked to reducing crime, but the article’s impact was explosive. It did not mention a phrase that would play an even greater role in redefining American law enforcement: community policing.

While the idea of community-oriented police work had been circulating in academic circles, it took the work of an off-the-record roundtable — HKS’s Executive Session on Policing — to bring police leaders and policy researchers together on the topic. (William Bratton, the former New York and Boston police commissioner, called the HKS executive sessions the “birthplace” of community policing.)

“There are lots of issues where practitioners have in their gut the right answers,” said Francis X. Hartmann, who developed and led the executive session with Mark Moore, Herbert A. Simon Professor in Education, Management, and Organizational Behavior. “These [police chiefs] are smart people who are so rushed, they don’t get the opportunity to step back and really think about what they’re doing. … We tried to help them move forward.”

The executive session was more than just a one-time meeting, but a unique model the Kennedy School has been developing for years. The School brings together roughly 30 leaders on an issue, carefully selected from both the field and the academy. The session on policing — still considered HKS’s most successful — included the U.S. attorney general, the head of Scotland Yard, and police chiefs and mayors of several cities. It convened from 1985 to 1991.

Twice a year, the officials would meet for two-day, off-the-record meetings to brainstorm ideas. From their work, they published “Perspectives on Policing,” a series of 17 papers that outlined a new way of thinking about police work.

The papers’ impact on law enforcement was almost immediate, said Hartmann, a senior research fellow of the Program in Criminal Justice Policy and Management and an adjunct lecturer in public policy at HKS. Follow-up research in the early ’90s found that the papers were required reading for many districts’ promotional exams, and that search committees for police chiefs were increasingly asking candidates about their plans for community policing initiatives.

In 1992, a year after the session ended, Bill Clinton ran for president on a platform that included funding for community policing. (He later pushed Congress to create the Community-Oriented Policing Services unit in the Department of Justice, which still operates.)

“It was the first time that any policing strategy had been the centerpiece of a successful presidential campaign,” said Christopher Stone, Daniel and Florence Guggenheim Professor of the Practice of Criminal Justice and director of the Hauser Center for Nonprofit Organizations.

The executive sessions were unusual for their ability to get academics and police chiefs to approach policing problems on the same level, said Malcolm Sparrow, a former inspector in the British Police Service who was invited to join the session while a midcareer M.P.A. student at HKS.

“I think of the executive session as a sort of centrifuge for ideas,” said Sparrow, now a professor of the practice of public management at HKS. “Stick them all in, throw them around, try to work with them in practice, and then the important ones come out. I don’t think it’s anything academics can do by sitting down and talking to each other, and I don’t think it’s anything professionals can do simply by being good at their jobs.”

Where broken windows policing emphasized the need to promote community order, community policing stressed the need to develop trust with the community, from neighborhood groups to nonprofits to other government agencies.

“In the popular consciousness, the two [ideas] were conflated, because they did share an ambition to take seriously what it is that people in a community were most concerned about,” Stone said.

Broken windows policing was meant to be more of a police tactic than a fundamental philosophy, said Kelling.

“You could practice it outside of community policing, but you did so at great risk,” Kelling said. “You needed the relationships at street level.”

The law enforcement landscape has changed in the years since the first executive session on policing, no doubt in part because of the success of the Harvard group’s work, said Christine Cole, executive director of the Program in Criminal Justice Policy and Management. Thanks to increased funding and technological advances, counterterrorism plays a bigger part of everyday policing. That effort must be balanced against more immediate problems of violence and crime, as well as new challenges, like growing economic inequality, that leave communities vulnerable.

With that in mind, the program has begun a new series of executive sessions on policing, which are funded through 2014.

“We’ve had a maturing, though not to its ultimate fruition, in the ideas and practices of community policing,” Cole said. There was a general consensus, she added, “that we hadn’t yet finished the work — that it required another look.”