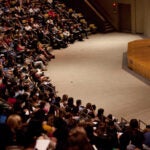 Business as a force for change

The American middle class has been battered by the loss of well-paying jobs for the 70 percent of the workforce without a college degree and failed by would-be protectors in government and private institutions, said panelists at the 35th Anniversary Forum of the Harvard Institute for Learning in Retirement on Friday.

Former Pennsylvania Gov. Ed Rendell, whose forthcoming book “A Nation of Wusses” criticizes politicians of both parties for failing to act in the country’s best interest, pointed to elected officials and corporate leaders who can’t see beyond the next election or quarterly earnings report.

“Nobody is looking at what happens 15 or 20 years down the road,” he said.  And regardless of political persuasion everyone has a stake in the future: “We can’t have a good economy if middle class income continues to go down.”

Frank Levy, an MIT urban studies and economics professor, outlined how the middle class has suffered declines since the 1970s as a result of trends ranging from globalization to rising tuition costs.

“Roughly speaking, the society, including the government and individuals, has made a lot of promises about payments to make in future that we can no longer make,” he said.

The middle class has been hurt by the failure of policymakers to plan and account for a sharp rise in health care costs and the widespread job losses tied to the housing collapse.

New York Times columnist Joe Nocera assigned another aspect of diminished incomes to the zeal corporate leaders since the 1980s have had for downsizing to boost profits, and the shift from pensions to mutual funds for retirees.  Nocera disavowed the conclusion of his 1995 book, “A Piece of the Action,” which painted a rosy picture of transition from a “country full of people who had money in the bank to a country of people who invested in the stock market.”

But as wages flattened with the decline of U.S. manufacturing, he said,  “This shift has turned out to be terrible for the people who have to save for their own retirement.”

It transferred risk from the institution to the individual, putting more pressure on the middle class, said Nocera, whose latest book, “All the Devils Are Here,” is about the hidden history of the financial crisis.

The best way to help middle-income residents in the United States would be to address the housing crisis, Nocera said. “We have no housing policy. Most people’s equity is tied up in their house and the country has not decided what to do with Fannie and Freddie.”

“Is it all the Republicans’ fault?” asked moderator Paul Solman, PBS business and economics correspondent and Harvard M.B.A. ’79, in introducing Rendell, a leading Democrat.

Rendell said the best thing that could happen to corporate America would be to get rid of quarterly earnings reports that put shareholders’ returns ahead of visionary and wise business management.

There was agreement among the panelists that U.S. corporations should pay more taxes.

Levy noted that the United States is in the bottom third of corporate taxes paid in the world.

Nocera said that tax reform would free up a lot of corporate money for better purposes.

“You would generate more revenue and make the corporations more efficient because GE wouldn’t have a 1,000-person tax office to find loopholes,” Nocera said. “But the reason it will never happen is this is how Congress lives and dies. They generate their own revenues by saving those loopholes or creating new ones.”

The panelists agreed that skyrocketing tuition is hitting the middle class hardest.

“If you’re poor, you can get grants and the rich pay full price,” said Nocera, using the example of the California public college system that now charges in-state students $30,000. “If you’re middle class you can’t afford it.

Nocera concluded, however, “The middle class is under siege but it’s not quite as hopeless as people like me portray it.”