In support of the generalist 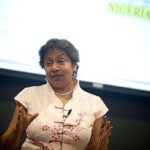 Disaster by the numbers

Delbanco says college is for learning to think, not job training

On the campus where he earned bachelor’s and doctorate degrees, Delbanco delivered the Lowell Lecture for the Harvard Extension School on the same day that his new book, “College: What It Was, Is, and Should Be,” was released by Princeton University Press.

“A college is a place that tries to preserve centripetal force in a spinning world,” said Delbanco, the Mendelson Family Chair of American Studies and the Julian Clarence Levi Professor in the Humanities at Columbia University. “A true college must also be a shelter from the preprofessional crosswinds.”

Trends toward rewarding research over teaching, focusing on scientific advances, and relegating instruction to part-timers are troublesome yet not new, said Delbanco ’73, A.M. ’76, Ph.D. ’80. As American higher education has become more commercial — from the underwriting of new buildings by medical and high-tech companies to the embrace of international students who pay full tuition — it is becoming unmoored, Delbanco asserted. And the rise of the for-profit university, he said, warrants skepticism at the least, and at the worst is “taking money for worthless credentials.”

Further, he said, higher education is in danger of becoming the preserve of the rich, citing statistics showing that the chances of college education for a child of parents earning more than $90,000 as one in two, while the likelihood drops to one in 17 for the offspring of parents earning less than $35,000 a year.

But such concerns are nothing new.

It was Abigail Adams, he noted, who said in 1776, “Education has never been in a worse state.”

“So anyone who sounds the alarm for a crisis in higher education has a boy-who-cried-wolf problem,” he said. “That doesn’t necessarily mean the wolf is not at the door.”

Delbanco, who was a finalist for the Los Angeles Times Book Award in biography for “Melville: His World and Work” (2005), said observers often defend college like they would a close relative: “We take it for granted, expect a lot from it, and we get defensive if anyone outside the family criticizes it.”

He acknowledged the argument by Presidents George W. Bush and Barack Obama that America needs to compete in the global economy, but noted it was President Thomas Jefferson who argued, “You cannot have a democracy without an educated citizenry.”

“China and India are looking at our liberal arts tradition,” he said. “The rest of the world is coming to get what we’ve got, while we’re in the process of giving it up.”

Delbanco, who was named America’s Best Social Critic by Time magazine in 2001 and won the Great Teacher Award in 2006 from the Society of Columbia graduates, said he hopes his book does not strike readers as fatalistic. He said the book is a description of “why this stuff is valuable and why we should defend it.”

Indeed, he said, there are pockets of hope in many schools where there has been success at keeping the education experience intimate and personal.

“There’s a lot of good stuff going on out there,” he said. “But there is no silver bullet.”

Before signing copies of his new book, Delbanco took questions from the audience of about 125 people gathered in a lecture room in Sever Hall.  In answering a question about the reliance on teaching assistants and part-time instructors — who make up at least 65 percent of higher education instructors nationally — he defended the tradition of tenured faculty.

“There are probably some subjects you can learn well through the Internet, and some of the best teachers I ever had were TAs (teaching assistants),” he said. But the tenured faculty needs to “take responsibility for the curriculum and educational enterprise.”

Sheldon Ross, a student of mathematics instruction at the Extension School, said afterward that he welcomed Delbanco’s perspective. “Some say college is simply about training, but I disagree,” he said. “It should be about the life of the mind.”

Helen Li, an international education consultant attending Delbanco’s talk, said she sees Chinese students eager to get a college education in America while China tries to borrow liberal arts concepts for its own system. But she said she sees both directions as positive.

“It’s win-win. We offer a fresh perspective on what you have, but I don’t think schools [in America] are giving up on the liberal arts tradition.”