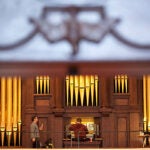 Piping up, to good effect

Nancy Rappaport calls herself one of the luckiest psychiatrists around. In 19 years working with youths at the Harvard-affiliated Cambridge Health Alliance, where she is the director of school-based mental health programs, Rappaport is as upbeat as ever — always seconds away from breaking into a Cheshire-cat grin — though she has certainly tackled many complex issues.

At a pit stop at Darwin’s Ltd., a food shop with a location across from Rappaport’s home base of Cambridge Rindge & Latin School, parents recognize her, thank her, and offer her updates on their children’s progress. “They keep me honest,” said Rappaport of the students she works with, who are mostly at-risk, sometimes volatile young people struggling to find their footing in the classroom and dealing with mental illness.

One such student was the impetus for Rappaport’s latest book, “The Behavior Code: A Practical Guide to Understanding and Teaching the Most Challenging Students,” co-written with board-certified behavior analyst and special educator Jessica Minahan.

“There was one second-grader that I was working with who was really explosive in the classroom,” recalled Rappaport. “But the single person who made the difference in this kid’s day-to-day life and who did practical interventions was Jessica.”

“And that’s the crux of this book — which is that there are very few variables you can control as a teacher, and the biggest one is how you respond to and make a difference in a kid who is anxious, oppositional, withdrawn, or has sexualized behavior.”

Their book, a user-friendly guide for teachers, is meant to be comforting, said Rappaport. “They’re not earth-shattering suggestions, but they’re really smart, in-the-trenches kinds of suggestions, so a teacher might say, ‘I’m stuck,’ read the book, and then say, ‘I have a different approach,’ ” she said. “We want to tell teachers that behavior is malleable and temporary.”

One approach in dealing with an oppositional student is to “write on a sticky note what you want the student to do, and walk away,” she said. “And that’s on the premise that sometimes when kids are being oppositional they want attention. So you want to minimize the interaction, get your point across, and not engage in a back-and-forth battle. And at the same time, invest time in catching them being good and try to reinforce that behavior.”

Rappaport, also an assistant professor of psychiatry at Harvard Medical School, has devoted her life to helping others. After losing her mother to suicide at age 4, Rappaport in 2009 published her memoir, “In Her Wake: A Child Psychiatrist Explores the Mystery of Her Mother’s Suicide,” which garnered critical acclaim.

“The memoir and this book are very different in some ways — but not, because, ultimately, what I share with teachers is that I’m an educator, and I want to help people understand the human condition,” she said. “They’re both very hopeful books, in some ways. My memoir is hopeful in that it suggests that you can suffer a tragic loss and come around and have a fulfilling life and make connections with people you love, and this new book is also about making connections with students who sometimes engage in behavior that can be very alienating.”

Last October, Rappaport received the American Academy of Child and Adolescent Psychiatry’s 2011 Sidney Berman Award for School-Based Study and Intervention for Learning Disorders and Mental Health. Always on the go, Rappaport is now gearing up for running the Boston Marathon this month.

“Teachers are some of the hardest-working people I know. But sometimes teachers can find themselves in losing battles with certain students,” said Rappaport. “There’s a gap in teacher instruction that happens, and our hope with this book is to fill a gap in literature.”