Disaster by the numbers 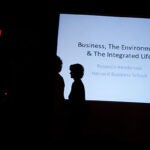 Changing the world, in under 9 minutes

Reported natural disasters are up dramatically since 1950, with more lives damaged by homelessness and injury, even as modern medical care and improved disaster response have reduced the number of lives lost, an authority on global disaster data said Monday.

The result of these trends is that the burden of care on survivors is increasing, according to Debarati Guha Sapir, director of the Brussels-based Centre for Research on the Epidemiology of Disaster (CRED), which collects and maintains two major global disaster databases.

Sapir, who spoke at the Harvard School of Public Health (HSPH), said that some of the dramatic increase in natural disasters observed since 1950 — up to 400 in 2011 from 50 in 1950 — is due to improved communications and reporting in remote places that used to be invisible to the international community. Still, Sapir said, a comparison of geophysical disasters such as earthquakes — which also should have been underreported — with climate-related disasters such as hurricanes and floods show a much greater increase in the climate-related kinds.

Sapir delivered a lunchtime talk, “The Curious Case of Disaster Epidemiology,” in HSPH’s Francois-Xavier Bagnoud building, in a session sponsored by the Harvard Humanitarian Initiative (HHI), an interfaculty program that seeks to use science to improve humanitarian disaster response. Paul Gregg Greenough, HHI’s research director and assistant professor of global health and population at HSPH and of medicine at Harvard Medical School, said CRED’s databases are “invaluable resources” for organizations such as HHI that study the public health aspects of disasters. HHI researchers have used data supplied by CRED in their studies and have contributed data from HHI research to CRED’s databases, Greenough said.

The most common climate-related disaster is flooding, Sapir said, making up half of such cases. Asia is the most flood-prone region, but also experiences more of other types of such disasters. The health effects of floods are often underreported, Sapir said, because epidemics related to floods often lag the disasters by a month or more.

Disaster epidemiology is a relatively new discipline, said Sapir, who traced the field’s roots to a series of natural and man-made disasters in the 1970s, starting with the war in Nigeria over the Biafra region’s efforts to secede.

Though those early efforts raised awareness, it was a Sahel famine in the early 1980s that brought action, leading to the expansion of international relief organizations. Today, Sapir said, the international community has developed a famine early warning system that showed its effectiveness by predicting the recent instance in the Horn of Africa. That warning, however, also highlighted the work that remains to be done, because steps weren’t taken to head off the famine.

“This happened because this time we haven’t gone the extra mile,” Sapir said. “We have not been able to link up the alert to the response.”

An international fund does exist that could be used for such emergencies, under the auspices of the United Nations Office for the Coordination of Humanitarian Affairs (OCHA). The missing piece, however, is a mechanism to release funds automatically when the famine early warning system says a disaster is imminent, Sapir said.

Sapir cautioned students in the audience against using financial losses as a measure of a disaster’s impact. The reason, she said, is that those figures are often provided by insurance companies. And in poor, developing nations, very little is insured. While the Japan quake and tsunami in 2011 amounted to $210 billion in losses, 57.4 percent of the $366 billion in disaster losses globally that year, the Haiti 2010 earthquake would have registered low on that scale, because so many of the 225,000 dead had little of value.

The debate over which statistics to use and how they’re calculated is a robust one, Sapir said, inviting students in the audience to join the fray once they’ve graduated.

“The controversy is rich and active. All of you can be part of this controversy once you finish your studies,” Sapir said.