Changing the world, in under 9 minutes 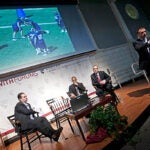 In the academic world, this could be the ultimate lecture challenge: Present a game-changing idea, and do so in fewer than nine minutes.

Brevity was not, however, the main goal for the inaugural event “One Harvard: Lectures that Last,” which featured short talks by a dozen speakers representing Harvard’s 12 graduate and professional Schools. The point of the session at the Charles Hotel on Tuesday was to reveal the crosscurrents of innovation that can flow from discipline to discipline, and to expose students to ideas from different Schools, said Divya Dhar, vice president of the Harvard Graduate Council and the event’s organizer.

One common denominator quickly emerged from the presentations on such diverse topics as globalization, education, green business practices, urban landscaping, and data systems: the impact of climate change.

Global warming was cited repeatedly, starting with a talk on the need to create better data collection and management systems, delivered by David Hemenway, professor of health policy at the Harvard School of Public Health (HSPH). He showed how measurements of gross national product don’t take into account changes in inventory caused by environmental damage. “We’re taught how to analyze data, but we need to be taught to create, maintain, and improve data,” he said.

Rebecca Henderson, Senator John Heinz Professor of Environmental Management at the Harvard Business School, picked up the theme in a rousing call for re-imagining business practices and incentives while remaining “ruthlessly pragmatic.” People don’t know what may happen with climate change, she acknowledged, but “that means we are running a roulette wheel, that we are running the risk of seriously destabilizing the world’s climate.” Government plays a key role in the issue, she said, “but I would not let business off the hook.”

Medical anthropologist and physician Paul Farmer, the Kolokotrones University Professor of Global Health and Social Medicine and head of the Department of Global Health and Social Medicine at Harvard Medical School, discussed international health inequities, such as the lack of secure water sources, in his examination of the cholera outbreak in Haiti. He also mentioned the need to promulgate an effective vaccine.

John Spengler, the Akira Yamaguchi Professor of Environmental Health and Human Habitation at HSPH and director of the sustainability and environmental management program at the Harvard Extension School, used Maya mythology to take a long view of Earth’s resources. What was striking was the disparity in public perceptions of climate change, with polls indicating that views are increasingly dictated by political affiliation, Spengler noted.

There were so many references to climate change that when Daniel Schrag, the Sturgis Hooper Professor of Geology and professor of environmental science and engineering, rose to speak about the time scale of climate change, he joked he would just talk about the weather.

He certainly had a familiar topic: the unseasonably warm weather in the state just a few weeks ago. That period was enjoyable, yes, but also unprecedented and worrisome, he said. “This is an event that should never have happened,” he said. “It reminds you of what we do not understand about the weather system.” Schrag spelled out a huge challenge: “I want to reduce the carbon footprint of nine billion people in 40 years.”

Some speakers delved deeply into their personal quests. In her talk on “boundary turbulence,” Nancy Elizabeth Oriol, associate professor of anaesthesia and dean for students at Harvard Medical School, talked about the creation of the Family Van, a mobile medical unit that brings health care to poor neighborhoods. “We’re trying to show if you actually go to the people, you can help people who traditionally shun health care,” she said.

David Carrasco, the Neil L. Rudenstine Professor for the Study of Latin America in the Faculty of Divinity and the Faculty of Arts and Sciences, began with a story about his grandmother to illustrate his work decoding a rich codex that provides illuminating information about attitudes and migration of peoples in 16th-century Mexico.

Other topics included breakthroughs in fields like bone regeneration, discussed by Roland Baron, professor of oral medicine, infection, and immunity and head of the Department of Oral Medicine, Infection, and Immunity at the Harvard School of Dental Medicine; and challenges in education, outlined by Fernando Reimers, the Ford Foundation Professor of International Education, and Ronald Ferguson, senior lecturer on education and public policy at the Harvard Graduate School of Education and Harvard Kennedy School. Charles Waldheim, the John E. Irving Professor of Landscape Architecture at the Harvard Graduate School of Design, showed how docks in places like Toronto are being transformed into green oases that integrate function and a sense of natural wonder.

The vast amount of technical information presented did not seem to dampen the positive message that positive change could happen, although the speakers all emphasized that would require shifts in attitudes, not just new technology. George Whitesides, the Woodford L. and Ann A. Flowers University Professor, displayed an image of a cup. He said simplicity was needed but that it “is much more complicated than you think.”

In the question-and-answer period, the panelists were queried on whether some global problems could be prevented. Schrag immediately cited the Y2K issue in the computer industry, which was foreseen and dealt with. But Farmer noted that, in health funding, “One of the problems is prevention and care get pitted against each other.”

The event was punctuated by enthusiastic applause by an audience both enraptured by the ideas and delighted at the efficiency in which they were presented.