Business as a force for change 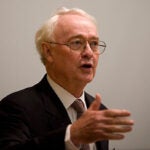 Policing for, and with, the community

Muhammad Yunus built a multibillion-dollar bank — and won a Nobel Peace Prize in 2006 — on a simple idea: Poverty need not be permanent.

“All human beings are entrepreneurs, with no exceptions whatsoever,” he told an audience of hundreds at Harvard Business School (HBS) on April 19. Given the right tools, he reasoned, most people have the innate skills to lift themselves out of poverty. Since establishing the Grameen Bank in Bangladesh in 1983, Yunus has seen his theory borne out: Millions have benefited from the bank’s small, interest-free loans.

The same entrepreneurial spirit that Yunus recognized in impoverished villages can also, he argued, be applied to the broader problems of poverty and disease.

“Human creativity has no limit,” he said. “It’s only a question of how we apply it.”

The talk, hosted by the HBS Social Enterprise Initiative, the HBS Healthcare Initiative, and the Harvard Innovation Lab (i-lab), was one of several appearances scheduled for the microfinance rock star during his Harvard visit. Earlier that day, Yunus lunched at the i-lab with student finalists for the President’s Challenge in social entrepreneurship, met with a group of faculty in the Social Enterprise Initiative at HBS, and sat in on a session of Sociology 159, known as the SE Lab, for Social Entrepreneurship Collaboratory.

As a professor at Chittagong University in the 1970s, Yunus didn’t question the “elegant” laws of economics he taught his students. But when Bangladesh was hit with famine, his theories suddenly seemed inadequate.

“You feel like an empty shell. You feel totally useless,” he said. “But certainly as a human being I have the capacity to stand by another human being and be useful to that person, even for a day.”

He began helping poor villagers, and soon discovered that among other resources, they also lacked credit. Banks were unwilling to lend small sums and doubted the villagers’ ability or commitment to repay.

“I couldn’t believe people have to suffer so much for so little money,” he said.

Yunus made his first loan of $27 to a group of 42 women in Jobra in 1976. Within several years, his operation had become so large that Yunus, who had been organizing the loans through a local bank, decided to launch Grameen Bank.

His strategy? “I look at the banks,” he said. “Then I do the opposite.” Grameen’s loans are granted overwhelmingly to poor people, to women, and to villagers. Even more unusual, he added, is that 97 percent of the bank’s shares are owned by those borrowers.

“Conventional banks are owned by rich people,” he said. “We reversed that, too.”

Yunus was forced out of his post as managing director of Grameen last year — a controversial move that has not been fully explained. He quickly (if obliquely) dismissed criticisms that microfinance, the field he pioneered, would become another vehicle for exploiting the world’s poor.

“The idea of owning anything, making money out of anything, never entered my mind,” he said.

Yunus detailed ventures beyond microlending that he hopes will improve the quality of life for Bangladeshis. These “social businesses” include a cheap yogurt that could be sold door-to-door to combat child malnutrition, inexpensive solar-power systems that now provide electricity to nearly 1 million Bangladeshi homes, and a partnership with Adidas to manufacture comfortable shoes for less than one euro ($1.48 U.S.) per pair.

“This is a new kind of business: a business to solve problems,” he said. Students of market capitalism, he told his HBS audience, are too often pushed in a “money-making direction” rather than a “problem-solving direction.” The pursuit of profits “is important, but it’s not the only thing human beings are capable of.”

Today’s young, socially minded entrepreneurs — well-represented in the HBS audience — live in a time when the distance between the possible and the impossible is shrinking, Yunus said. It’s important to envision a world without poverty, and to imagine how we might create that world, he added. Just as we once relied on science fiction to inspire and guide us toward a possible technological future, we must now dream up tomorrow’s social innovations.