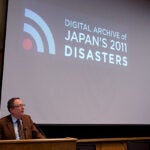 The record of Japanese disaster

Founder of Teach For America defends her in-class initiatives

The woman who transformed her senior college thesis into a national teaching movement addressed some of her toughest critics during a discussion Thursday at the Harvard Graduate School of Education (HGSE).

Since its inception in 1990, Teach For America (TFA) has recruited close to 33,000 college graduates to teach in underserved communities for two years. But some observers argue that the nonprofit, recently named one of the nation’s 100 top places to work by Fortune magazine, has little lasting impact in the classroom.

Founder Wendy Kopp defended her initiative as a major catalyst for change.

Critics like education historian and former U.S. Assistant Secretary of Education Diane Ravitch — who argue that placing a teacher with little to no previous experience in a school for such a limited time can’t help solve the nation’s public education problems — are simply wrong, said Kopp.

“This is not about two years,” she said.

Teach For America, Kopp argued, has an impact on the broader education reform movement by creating a corps of men and women who continue to fight for lasting change well after their two-year commitments end. For many TFA corps members, said Kopp, the experience of teaching in low-income schools becomes transformative and fundamentally changes “every single decision they make thereafter.”

The initiative places recent college graduates or professionals in challenging school districts. More than 60 percent of the instructors continue to teach beyond their two-year commitment. Two-thirds of the organization’s 24,000 alumni remain in the education sector, and many have jobs with connections to schools or low-income communities.

In a host of different capacities, and inspired directly by their work with TFA, “these people,” said Kopp, “are fighting for change.”

Some of those change agents joined Kopp on stage as part of an Askwith Forum panel discussion moderated by HGSE Dean Kathleen McCartney. Currently enrolled at the Harvard Graduate School of Education, the panelists were all former TFA corps and staff members.

Aaliyah El-Amin learned about TFA while in college but had no plans for a career in education, she told the HGSE crowd. She simply considered the two-year program a chance “to do some good.” But after working her stint with 24 fourth-graders in a room with no windows or doors, everything changed.

“I feel like I was changed profoundly by the faces and the stories and the hearts of the people that I met in my classroom,” said El-Amin, who became a curriculum specialist for TFA in Houston, and later executive director of the group in Charlotte, N.C. Now, she is a third-year doctoral student at HGSE focused on education policy, leadership, and instructional practice.

“Standing up in front of [my students] every day and being challenged to figure out how to move them forward and be partners with them … shifted my thinking about what I could bring to the world,” she said, “and ultimately what I was responsible to bring to the world.”

Though she admitted that the current state of reform efforts is “just not good enough,” Kopp remained hopeful.

Compared with 20 years ago, she said, “We know more about what is possible and how to change things.”