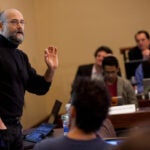 New York Knicks basketball sensation Jeremy Lin was part of a teaching moment during Pei-Chia Lan’s recent talk at the Radcliffe Gymnasium. Only the image of the famous Harvard graduate was projected on the screen at the front of the hall, but Lin’s picture helped to underscore a point that Lan made about the attitude of middle-class Chinese and Taiwanese immigrant parents toward their children’s participation in team sports: They aren’t big fans.

The parents find daily practices too time-consuming, with a schedule that often conflicts with Chinese language school, said Lan. Many parents also dread the “burden of socializing with American parents on the soccer field.”

Author of “Global Cinderellas: Migrant Domestics and Newly Rich Employers in Taiwan,” a detailed ethnographic study of migrant domestic labor in Taiwan, Lan has brought the same rigor to her Harvard research for her next book project. As a fellow at the Radcliffe Institute for Advanced Study, she is exploring how Taiwanese and Chinese immigrants negotiate cultural differences in child rearing and how they parent transnationally.

Through extensive interviews in the United States and Taiwan, Lan has uncovered several telling trends that suggest how immigration, the changing nature of the global economy, and differences in class and social status affect attitudes toward parenting.

In Taiwan, Lan found there has been a real shift in parenting styles, particularly in middle-class families, one that reflects the influence of Western models. Once more concerned with authority, discipline, and control, Taiwanese parents have adopted parenting strategies based on notions of cooperation, autonomy, and trust. They have also shifted from a strict focus on academic achievement, she said. Worried about their children’s well-being in “an overcompetitive education system, they put an increasing emphasis on linking learning and fun.”

The reasons for the change include the industrial revolution in Taiwan, a time when children became “economically useless but emotionally priceless.” A reduced birth rate, the emergence of the nuclear family, democratic reforms of the 1990s, and rising Western influences also help “explain the changing notion of children in Taiwan.”

Middle-class parents in Taiwan, Lan said, embrace Western parenting as “a superior cultural model to help them achieve cosmopolitanism in distinction from the lower class, with limited global exposure.”

In the United States, middle-class immigrant parents interviewed by Lan revealed a strong interest in their child’s academic success. But that drive, she suggested, is often motivated by a sense that their child has to make up for a racial bias.

While immigrant parents see their American neighbors as “loose parents,” they themselves “highlight the Chinese values of discipline and hard work as necessary tools for their children to survive in the context of racial inequality,” said Lan.

She suggested that those parents have a dramatically different idea of assimilation. They make no effort to stop their children from speaking their native language, which was something that parents in the ’70s and ’80s discouraged in an effort to ensure their children were as American-sounding as possible. Today, middle-class parents encourage their children to speak Chinese, she said, in large part as a way to make them more marketable in a global economy where China is a rising force.

Working-class immigrant parents, who see relocation to a new country as the ultimate move toward a better life, instead use a more “permissive” Western-based parenting model, said Lan, in the hope that “their children, living in an ethnic enclave, will achieve assimilation to a mainstream society.”