The ethical letter of the law 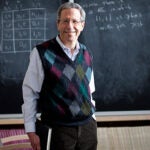 If the countless headlines in recent years are an indication, we live in an age dominated by a corporate playbook that considers success at the expense of others a standard part of doing business.

But increasingly, observers fear that same philosophy is too often becoming the norm in other professions.

“Lawyers — even Wall Street lawyers — are supposed to be a different breed from their clients and banker counterparts,” read Gardner from the piece. “They sign an oath when they are admitted to the bar. Their ethical standards are supposed to be beyond reproach. And yet that seems to be shifting. For many years, if a lawyer was called ‘commercial,’ that was considered a pejorative. Today, it is increasingly a badge of honor. Indeed, much of the conversation among the top lawyers … was not about the rules, but about how far you could push them.”

“What goes on in your mind when you read something like this?” Gardner, John H. and Elisabeth A. Hobbs Professor of Cognition and Education at the Harvard Graduate School of Education, asked his young audience, which was largely made up of lawyers in training.

“I can see where that culture of the profession may be coming from,” replied one student, who said he had been part of a recent conversation about how to push ethics to the limit.

Another worried that as people increasingly join the legal profession for financial security, personal “moral frameworks might not just be enough to push back against this kind of thing.”

There are other paths, reminded the professor renowned for his theory of multiple intelligences, who has become a crusader in recent years on how to lead a moral, ethical, truthful life, in large part through good work.

During his lunchtime talk sponsored by Living Well in the Law, a new program of the HLS Dean of Students Office, Gardner offered students tips from his GoodWork Project. Founded in 1995, the initiative conducted more than 1,200 interviews over a decade with professionals from various fields to “identify individuals and institutions that exemplify good work — work that is excellent in quality, socially responsible, and meaningful to its practitioners.”

Good work, the findings showed, shared three fundamental qualities. It was technically excellent, personally engaging, and ethical. It also required a certain alignment — a sense that “everybody involved in the enterprise wants the same thing,” said Gardner.

But a careful analysis of the data revealed that the good work that Gardner and his colleagues identified was largely missing from the professional landscape. “We were not that happy with the picture of the professions that we were gleaning from that study,” he said.

One problem in many professions, including the law, was a lack of mentoring. Junior lawyers, said Gardner, felt like they were “operating by the seat of their pants,” while older lawyers lamented the fact that they didn’t have time to help counsel their less-experienced colleagues.

Particularly worrying were the responses of young interviewees who, while eager to do good work, were in no particular hurry to do it right away. Many felt they couldn’t afford to do it while they were young and had to compete with others who were not ethical. Once they acquired money, power, and prestige, said Gardner, they indicated they would do the right thing.

Concerned about the waning regard for good work, Gardner and his colleagues created a playbook of their own as part of the initiative. The GoodWork Toolkit was designed to “help people think about these issues while they were still making career decisions.”

He offered the group the example from the book, the true story of Joseph, a young lawyer who took a case involving a big bank and was told by the client that he couldn’t speak about it within the firm. Keeping his word, Joseph held back information from one of the firm’s senior partners who was working on a case involving the same bank. Later, when the senior partner learned of his deal, she felt betrayed.

Most people advised the young lawyer that he did the right thing, but faced with the same situation today, he said he would “act very differently,” said Gardner, and insist that he be able to divulge the information, or decline the case.

As Gardner discussed the case with his listeners, many of whom thought the lawyer had acted ethically, he noted that their dialogue, a dynamic back-and-forth that explored the decision from a variety of perspectives, was one important way of promoting good work.

“My one recommendation in this area is that we create common spaces,” said Gardner, a type of physical or virtual area where people can openly discuss the ethical problems they’ve encountered, and how they have tried to deal with them.