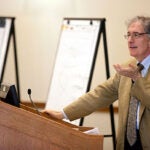 The ethical letter of the law

The U.S. Supreme Court is taking up the controversial issue of national health care reform this week, in a major case that challenges the legality of the Obama administration’s most significant piece of social legislation, a far-reaching law that aims to overhaul the nation’s health care system and provide coverage to millions more Americans.

The court is hearing oral arguments over three days. One observer will be Laurence Tribe, Harvard’s Carl M. Loeb University Professor, and a former legal adviser to the Obama administration. Gazette reporter Colleen Walsh caught up with the constitutional scholar shortly before he left for Washington, and asked his thoughts on the landmark case.

Gazette: As you think about this case, what is most significant to you as a constitutional scholar?

Tribe: I think that the cases raises, in a very fundamental way, the issue of federal power to enact laws with some degree of flexibility, as I think the Constitution basically contemplates. If the court were to accept the quite formalistic arguments against this law, arguments that draw a distinction between using the tax system to pressure people into engaging in commerce, [or] using it to forbid commerce … I think the net result would be a dramatic cutback in the flexibility that the Constitution contemplates giving Congress over the national economy. And I think that in the end, when the court stares that prospect squarely in the face, there will be a majority that will step back from that precipice and not engage in that kind of intensely restrictive review of congressional legislation. I think that although the opponents of the law have done a very good job of creating what looks like a plausible argument about the limits of congressional power, they in fact are asking the court to move in a dramatic new direction that would bring into question almost everything of any great importance that Congress has done since the 1930s, and would cast a pall over the kinds of legislation Congress might need to enact in the future.

Gazette: Do you think Congress overstepped its authority with this legislation?

Tribe: I think the fact is that this is very much within the reach of Congress’ power. It’s dealing with people, who, in the aggregate, shift over $40 billion of unpaid medical bills to others in the form of increased insurance premiums and added tax burdens and it’s a perfectly reasonable exercise of Congress’ power over commerce to take this large chunk of the nation’s economy, something like 17 percent, and impose a requirement of personal responsibility on it, and I think that it would be a very major error for the court to strike it down.

Gazette: If the court were to strike the law down, some critics would argue that act would be a form of judicial activism. Do you agree?

Tribe: That is not a phrase that I find useful to use. People use the words judicial activism to describe judicial action that they don’t like. If they believe that the court is hewing the basic meaning of the Constitution, they don’t call it judicial activism. I don’t really find that a useful image, and I just don’t want to contribute to its continued use. I think that it would be a mistake if the court were to strike this down. It would certainly not be an exercise of judicial restraint. But if I agreed that this crossed some dramatically significant constitutional line, then the fact that it would not be a restrained thing for the court to do would not be decisive for me.

Gazette: Can you explain how the entire law could be thrown out if the individual mandate is struck down?

Tribe: It’s a very complicated issue. I do agree with the position taken by the United States that if the mandate were struck down, then the requirement that insurance companies cover people without regard to their pre-existing conditions, and without regard to their current medical problems, would probably have to be struck down as well. But I do not agree with the position taken by Florida and the other 25 states that the whole law would have to fall. … What they could do as a result of today’s argument, although we wouldn’t learn that until June, is conclude that the individual mandate cannot be adjudicated until after someone actually violates it and is subjected to a penalty. That would not be until 2014. But the other portion of the law that is being debated in some detail on Wednesday, the mandate upon the states requiring them to expand the reach of Medicaid, would still be ripe for decision. I think that argument is a clear loser for the challengers. I don’t think that that’s a serious argument, although I think they are making as silk a purse out of that sow’s ear as they can.

Gazette: Justice Anthony Kennedy has typically been the swing vote in close decisions. Do you have any sense of how he will side?

Tribe: If I did [amid laughter], I would be a mind reader, and I would have another line of work.

Gazette: What impact do you think the decision will have on the upcoming elections?

Tribe: That is one of the most imponderable things. I think ironically a decision upholding the law would ratify the major domestic achievement of the administration, but at the same time it would give the opponents a clear talking point, namely that they need to be elected as the only way to get rid of a law that they find objectionable. I think if the law were struck down, it would deprive the opposition to President Obama of that line of attack, but on the other hand it would be a major blow to the achievements of the administration.

Gazette: If the law is upheld, will it mean there has been an increase in federal power?

Tribe: I think this would not establish any new kind of federal power, the power to regulate a clearly economic choice which has major interstate impact and that’s already well-established. It certainly doesn’t follow from this that people could be required to eat broccoli or any of the other things in the “parade of horribles.”

Gazette: Do you have any final thoughts?