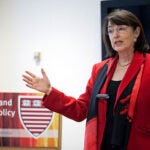 There’s an ironic moment in “Game Change,” the new HBO adaptation of the best-selling book on the 2008 presidential election, which held its premiere screening at Harvard Kennedy School Thursday night.

“No news story lasts for longer than 48 hours anymore,” one of Republican nominee John McCain’s advisers tells vice presidential candidate Sarah Palin during an onslaught of negative coverage. News isn’t supposed to last, he assures her: “The news is meant to be entertainment.”

The punch line, of course, is that Palin — chosen by McCain’s strategists to provide the “game-changing” narrative twist the floundering campaign needed — would go on to dominate the headlines for much longer than a mere two days. In fact, if the Institute of Politics (IOP) event at the John F. Kennedy Jr. Forum was any indication, the drama of Palin’s meteoric rise to political prominence can still draw an enthusiastic, curious crowd.

Political journalists and “Game Change” authors Mark Halperin ’87 and John Heilemann, M.P.A. ’90, returned to Harvard to discuss the movie, which begins airing on HBO on March 10, in an event moderated by IOP Director Trey Grayson.

From the beginning, Heilemann said, the 2008 campaign seemed to beg for movie treatment, but he and Halperin didn’t know the first thing about writing a screenplay.

“We thought we’d try to get as far behind the curtain as we can to tell a really deeply human story,” said Heilemann, national political correspondent and columnist for New York magazine. From their months of reporting and hundreds of behind-the-scenes interviews, he and Halperin wanted to show how the candidates “experienced this campaign from behind their eyes, what they went through, how it changed them, how their strengths and weaknesses were brought to bear.”

The film amplifies the focus on big personalities by homing in on Palin, played by Julianne Moore, and to a lesser extent McCain (Ed Harris) and his adviser Steve Schmidt (Woody Harrelson). Moore — who underwent an uncanny physical transformation for the part — was a natural choice for the highly scrutinized role, said HBO Films President Len Amato, who appeared on the evening’s post-screening panel.

“We knew when we were creating this story, there’s going to be a scene where we have our actress watching Tina Fey [on ‘Saturday Night Live’] play Sarah Palin,” Amato said. “Once you realize you’re going to have a scene or two like that, the list of who could play that becomes very, very short. They have to be able to transcend that role, transcend that moment, and not take you out of the picture. Not a lot of people could do it, but Julianne Moore could.”

The film’s depiction of Palin — as an essentially good, family-oriented woman who becomes slightly unhinged after being thrust into the national consciousness — has already drawn criticism from conservatives. But the authors stood behind the “reported fact” that informed their portrayal.

“There was not a single discussion that we were involved in in the making of this film … where bias or agenda came up at all,” said Halperin, editor-at-large and senior political analyst for Time magazine. “The book and the film are as balanced and accurate and fair a portrayal of Sarah Palin during those 60 days as anything that’s been done.”

The authors even expressed sympathy for Palin’s plight. By choosing Palin as his running mate at the last minute, McCain and his advisers “did not put her in the best position to succeed,” Heilemann said. McCain “spent from March to August vetting candidates he would never choose, and he ended up five days before having to make this choice.”

When critics called Palin unprepared to run, he said, they alluded not just to her relative lack of national or foreign policy credentials, but to the fact that she was woefully under-trained by McCain’s advisers on the ins and outs of presidential campaigning.

The importance of choosing a credible veep-to-be was the primary lesson of the 2008 election, Heilemann added.

“Pick someone who is ready to serve from day one if something should happen to you as president-elect, and someone who is perceived that way,” he said. “Every presidential nominee going forward should look at this as a case study in why it’s so important to choose someone who dispenses with that question right off the bat.”

Halperin offered his own advice, a lesson that could have been the theme of the film.

“Campaigns are chaotic,” Halperin said. “You’ll never have a campaign that works like clockwork, no matter how organized the campaign is, and therefore you must always have the human element in mind.”

It remains to be seen whether two other major narratives from the book — Democrat John Edwards’ political downfall and Barack Obama and Hillary Clinton’s showdown for the Democratic nomination — will be made into separate movies, Amato said.

But political junkies can take heart. Halperin and Heilemann assured the crowd that a book on the 2012 campaign was already under way.