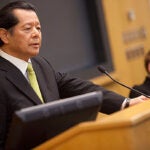 Chilean head of mine rescue effort explains why it succeeded

Laurence Golborne was working in relative obscurity as Chile’s mining minister in August 2010 when a mineshaft collapse thousands of feet below ground in a remote corner of that country catapulted him into the international spotlight.

The subsequent 69-day operation that Golborne led to rescue 33 trapped miners made him famous around the world.

Faust met Golborne during an official visit to Chile with Harvard Kennedy School Dean David T. Ellwood last spring. She said she knew then that Golborne had to come to Harvard to share his story.

But, as Golborne reminded the audience, it was a story that could have well ended differently.

“Essentially, a crisis happens when all the rules fail,” Golborne told the audience. Accompanied by a slideshow, with vivid images of the rescue operation, Golborne reminded the audience that crisis and government are a potential mismatch.

The usual procedures of government, which requires slow, deliberate action, can be incompatible with a situation that is unexpected, is unique, requires urgent response, and has no textbook answers.

“This is the scenario in which leadership takes on a complementary role,” Golborne said.

Golborne said the ability to manage a lot of pressure was key over the first 17 days, during which the rescuers faced disappointment and frustration. The teams Golborne assembled had to deal with family members, the media, and the vast technical difficulties of the rescue itself. Then came the famous note, attached to a drill that had been used to reach the trapped miners, announcing that they were alive and well.

“Many, many things had to go right for those 33 miners to be rescued, and those things did go right,” said Herman “Dutch” Leonard, Baker Professor of Public Management at the Kennedy School and an authority on crisis management, who introduced Golborne. “It’s a huge credit to the people involved, who in completely novel circumstances managed to learn their way forward into a whole new paradigm for mine rescue.”

Why did the rescue mission succeed? There were three key elements, Golborne said: team building, hard work, and motivation; the need to risk failure in order to succeed; and an understanding that complex problems have no simple solutions.

Asked by an audience member why he had entered, and stayed, in the public sector, Golborne remembered that he was hesitant when he was first asked to join President Sebastian Pinera’s government. He said his wife persuaded him.

“I have to confess that every day I feel like I made the best decision of my life,” he said.

The event marked the beginning of Harvard Kennedy School’s annual Public Service Week. That will serve as the kickoff for Harvard’s Global Month of Service, which begins April 1.