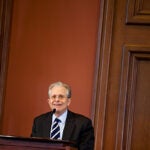 Assurances of the absolute safety of Japanese nuclear plants lulled the public and government into a false sense of security that was shattered a year ago when an earthquake and tsunami crippled the Fukushima Daiichi power plant, causing the worst nuclear disaster since Chernobyl.

A review of the nuclear disaster found ties to the Japanese public’s strong anti-nuclear sentiment, born in the anti-nuclear protests of the 1970s and with roots in the bombs that fell on Hiroshima and Nagasaki. This sentiment forced utilities to present their nuclear plants as completely safe to the extent that disaster planning and preparation were hindered, according to Yoichi Funabashi, chairman of the Rebuild Japan Initiative Foundation, which conducted the review.

Funabashi, who spoke at the Center for Government and International Studies’ Tsai Auditorium on Monday, said the seven-month review revealed a culture of complacency by regulators and a reluctance to alarm the public that ultimately proved harmful. In one case, radiation-resistant robots designed for use in a nuclear disaster were never purchased because utilities were concerned about alarming the public.

“None were interested in procuring it because to do that would give the impression that existing nuclear facilities were not 100 percent safe,” Funabashi said.

The power plant was the site of several explosions, reactor meltdowns, and radiation leaks after a 9.0 magnitude earthquake struck Japan on March 11. The earthquake generated a tsunami in excess of 100 feet high that traveled as far as six miles inland and, at the Fukushima Nuclear Power Plant, destroyed backup generators responsible for keeping the nuclear fuel cool.

Funabashi had harsh words for Japan’s nuclear regulators, saying the utilities had more power than regulators, and that regulators revealed “thorough ineptness” and “lack of qualification” in dealing with the crisis.

Funabashi delivered the Distinguished Visitor Lecture of the Weatherhead Center for International Affairs’ Program on U.S.-Japan Relations. The event was co-sponsored by the Edwin O. Reischauer Institute of Japanese Studies.

An independent review such as that conducted by the Rebuild Japan Initiative Foundation was needed because there is deep concern about the status of the Japanese nuclear industry amid an official culture that discourages dissenting views and independent analysis, Funabashi said.

“Where to start over is a critical question for the Japanese public policy debate,” Funabashi said. “Japan has a problem of not generating genuinely independent public debate. … Dissenting views are not welcome. We believe this time it has to be different.”

Funabashi, who from 2007 to 2010 served as editor in chief of one of Japan’s largest newspapers, Asahi Shimbun, gave high marks to the Japan Self-Defense Forces, which were mobilized by then-Prime Minister Naoto Kan, and which, along with employees of Tokyo Electric Power Company, provided the main response to the crisis.

March 17 was a crucial day, Funabashi said. That was when Self-Defense Forces succeeded in dumping water on one of the crippled reactors after having failed the day before. Their success showed that Japan could successfully defend its people, Funabashi said, and may have symbolically marked the end of the postwar period in Japan.

Japan faces many challenges still, Funabashi said, including the disposal of radioactive debris. There are also many questions about the future of the country’s nuclear industry — which, despite the disaster, provides an important alternative source of energy for a nation heavily reliant on Mideast oil.