In tune, without limits 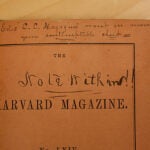 Despite lacking a hand, violinist makes beautiful music ... and more

Positive psychology guru Mihaly Csikszentmihalyi defines his concept of “flow” as a seamless connection between body and mind. Elite athletes call it “being in the zone,” a hyper-focused mental state resulting in streamlined, streaming movements.

“It’s when there is no resistance between work and what you are,” said Adrian Anantawan one morning, as he played a passage from Claude Debussy’s ethereal “Clair de Lune” in the still of Adams House’s Lower Common Room.

For many top musicians, such a feeling often only comes after years of practice. For Anantawan, who was born without a right hand, developing that type of powerful concentration with the violin took extra resolve, a dose of ignorance, and a spatula — a specially designed attachment made of plastic and Velcro that allows him to hold his bow.

After years as a professional musician, the gifted violinist is enrolled in the Arts in Education Program at Harvard’s Graduate School of Education (HGSE), with the goal of helping other disabled students in their artistic and creative development.

“The opportunities,” Anantawan said, “are limitless.”

While investigating the role of adaptive musical instruments in a universally designed music curriculum, Anantawan has connected with scholars at Harvard and beyond, such as music and technology guru Tod Machover, considered the grandfather of “Guitar Hero,” and head of the MIT Media Lab’s Opera of the Future group, and members of the Harvard Medical School community, for lengthy discussions on rehabilitative science.

He has also brought his talent and drive to the classroom, helping students in an inclusive school in Boston with a variety of musical and arts projects.

“If you want to be able to design curriculum or to create new musical instruments for any child, you have to understand how they work … their behavior, their decision-making processes, the interplay between imagination, play, and learning. That’s what fascinates me.”

Anantawan’s own artistic journey began in large part because his parents “didn’t know any better.” Realizing their young son was unable to play the recorder, which requires the use of the fingers on both hands, they quickly sought another musical option.

“We were successful because of that ignorance,” he said. “We came from the premise of ‘why not?'”

With input from Anantawan, a rehabilitation center in his native Toronto helped to create his adaptive device for the violin. The Canadian’s dedication and talent ultimately gained him entrance to Philadelphia’s prestigious Curtis Institute of Music for his bachelor’s degree, and later to Yale University, where he received his master’s degree in music in 2006.  His professional career has included performances at the White House, the 2004 Summer Olympics in Athens, and Carnegie Hall. But for Anantawan, something was missing on stage.

“I just felt,” he said, “like there needed to be something more.”

That something more first took shape during a tour of the same rehabilitation center years after it had first helped him as a child. There for a concert, Anantawan was introduced to a virtual device that translates a person’s movement into sound. Intrigued, he sought a grant from Yale and used the funding to assemble a team of psychologists, music therapists, doctors, researchers, and musicians to explore the connections among music, technology, and health care, using the virtual tool. The project culminated in a recent performance given by a former violinist paralyzed from a neurological disorder, and now a quadriplegic, who played with the Montreal Chamber Orchestra.

“Music was such an important part of his life growing up, and to see technology used to give him access to performance once again, but also at such a high level, makes me optimistic of the future for young children with disabilities.”

Inspired by the experience and eager to offer children with disabilities the chance to “communicate their stories to a wide audience,” he turned to the HGSE’s Arts in Education Program. “I realized this was the place I needed to be,” said Anantawan, who sent Harvard his only application. It was Harvard, he said, or nothing.

After graduation, he hopes to teach in a similar inclusive environment where he can work on leveraging the implicit strengths in every child, “regardless of ability.”

For Anantawan, the work is also deeply personal. He recalled being “marginalized” in school for being “slightly different,” and how his world opened when he joined a chamber orchestra at age 12.

“It was one of the first times I was accepted within a peer group, mainly because it’s how you sound; it’s not how you look. It’s how you express and communicate.”

With his future work, he hopes to help children “feel included and be able to express themselves on an equal level with their peers.”

He is well on his way. On his tablet computer, he proudly played a video of his fifth-graders at the Dr. William W. Henderson Inclusion Elementary School performing a dance routine to Michael Jackson’s “Thriller.” A third of the students there have some type of cognitive, behavioral, or physical need. But on stage they were a polished unit, and they were having a blast.

“This is as fulfilling as any concert that I have given in my life,” said a beaming Anantawan. “Carnegie Hall can’t beat these kids.”

The violinist happily admits there are two types of flow in his life now. One involves playing his instrument, the other his work with children.

“I could do this work for hours nonstop,” he said, “and still be happy.”