Education reform, by the numbers 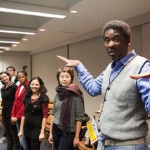 Fun that helps change the world

But he isn’t in finance or economics, he’s in education policy, and he hopes to use his analytic expertise to help reform the country’s public school systems with the help of a program at Harvard’s Graduate School of Education (HGSE).

Since 2008, the Strategic Data Project (SDP), under Harvard’s Center for Education Policy Research, has placed fellows like Bowman in state education agencies, school districts, and charter school management organizations where they are helping policymakers to decode an avalanche of educational data. Their mission is to transform the use of data in education to improve student achievement.

“We are creating a new profession in education called analytic leaders,” said SDP Executive Director Sarah Glover. “These are people who are facile with data, strong analytically, and who know how to think about problem solving.”

In the past, educational data analysts have often been isolated inside education agencies, said Glover, simply crunching numbers with a focus on compliance versus problem solving, and with a limited ability to prompt reform. Through a dual fellowship program, with a strong emphasis on leadership, the SDP aims to alter that dynamic.

The project both recruits fellows with backgrounds in public policy and data analysis and places them in its partner organizations, while simultaneously developing a corps of analysts already employed within those partner agencies. Working in tandem, they explore solutions based on the numbers.

“Our goal is to really build capacity in the agency, by catalyzing with external talent, but also investing in the people who are already there so that collectively they will make progress faster,” said Glover.

The two-year program supports its fellows through web-based discussion groups, weekly conference calls with Harvard experts, and a series of workshops hosted both at Harvard and its partner organizations, which use case studies from the field focused on current data analysis and research methods.

“These are not people who just generate methodologically sound but completely hard-to-explain analysis,” said Glover. “They are exploring how to offer decision makers compelling, understandable data they can act on. We want our fellows at the management table and the policy table, not in the back room pulling data sets.”

Many experts acknowledge that the education sector has struggled in its efforts to use data effectively. One problem has been that, until recently, large sets of education information were generally nonexistent. The landscape changed in 2001 with enactment of the No Child Left Behind Act, a framework of federally mandated educational reforms that placed heavy emphasis on test scores and standardized measures to evaluate student performance.

With statewide testing came a host of newly available information. And advances in data analysis software made those test results easier to analyze.

But some observers have failed to use a strategic approach, or may not have examined “the story of what the numbers are saying with an eye toward how things can improve,” said Bowman, who has an engineering degree and a Ph.D. in policy analysis. The SDP is helping provide “the context in which the numbers can be understood and made relevant for policymakers.”

An example of that work is a recent project conducted by fellows placed in the Fulton County school district in Georgia. The Harvard researchers took a closer look at the numbers of high school seniors who indicated on surveys that they would be heading to college after graduation. Comparing those figures with the statistics in a national database that collects information on college enrollment, the fellows found that many seniors who said they planned to go college never actually made it there.

Together, the fellows and school officials developed a program that paired guidance counselors with seniors during their summers after graduation to help the students prepare for college.

“It had a major effect,” said former SDP fellow Korynn Schooley, who worked on the program. “It increased college enrollment for those students in the range of 4 to 5 percentage points.”

Placed with the Albuquerque Public Schools, Bowman is working on a teacher evaluation pilot program. He praised the Harvard project for connecting him with a network of people with a shared vision. “The ability to take time out and be able to think and talk with other people who are trying to solve similar problems,” he said, “has been very helpful.”

Equally helpful, he said, is the project’s strategic approach. The program reinforces the idea that “I need to make sure that somebody besides me can actually understand the data,” said Bowman. “That is the strategic part of the project, because there is data everywhere. … But if you can’t make it mean anything [to others], then you’ve wasted your time.”