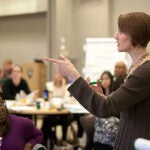 Education reform, by the numbers

We live in a world of too much information and not enough knowledge. No one feels the strain of that digital-age truism more than journalists, who are asked to ferret out and process information with ever-increasing speed — and often at the expense of providing solid context for the news of the day.

Journalist’s Resource, a new online tool developed at Harvard’s Joan Shorenstein Center on the Press, Politics and Public Policy, aims to put that background knowledge at the fingertips of reporters, bloggers, or even concerned citizens by making the work of academics less opaque and easier to find.

But the website, which curates scholarship on government, economics, society, and the environment, is more than just a reliable shortcut for deadline-driven journalists. It’s also the ever-evolving manifestation of two Harvard Kennedy School (HKS) professors’ mission to promote what they call “knowledge-based reporting” in the mainstream media.

“There is a real need for deepening journalism with verified, high-quality knowledge that informs the kind of serious journalism that makes our democracy work,” said Alex S. Jones, director of the Shorenstein Center and a lecturer in public policy at HKS.

The thought of a reporter parsing data or perusing peer-reviewed journals before picking up the phone or dashing to the scene represents a bold departure from the way many non-specialized journalists (such as those who cover city news, education, or even politics) operate. Throw in a laptop and a smartphone, and the image of a typical reporter at work hasn’t changed much from the era of “All the President’s Men,” or even “His Girl Friday.”

A familiarity with scholarly research “is not deeply ingrained in the craft,” said Thomas Patterson, Bradlee Professor of Government and the Press at HKS. “It’s not thought to be essential.” But, as Patterson — who’s writing a book on the subject — argues, it should be.

“If there were a handful of journalists who understood the financial meltdown in 2008, that’s about it,” he said. “When Sept. 11 happened, how many journalists in this country knew the Taliban? These things come flying out of nowhere. I think there’s a recognition out there, especially among these very good places that are determined to make their reporting as accurate as possible, that their journalists have to be armed with information.”

Academia, with its carefully deliberated, long-gestated research, should be a natural source of such information, but many journalists have been reluctant to turn to scholarship in their day-to-day reporting.

“They ignore it because it’s too technical, because they’re not used to going looking for it, because it’s not presented to them in a form they can use,” Jones said. And in a digital world, it can be harder to ferret out high-quality sources of scholarship, because, he said, “You get the good, the bad, and the ugly.”

That’s where Journalist’s Resource comes in. It’s part of a growing movement to arm journalists not with a standard body of knowledge — as doctors, lawyers, or other professionals learn in their training — but with a set of analytical tools to help them parse information and research.

The site is simple and user friendly. Imagine a journalist wanted to report on the impact of tuition increases in a state’s universities and community colleges. A search for “student loans” on Journalist’s Resource brings up four studies on student lending, each with a summary of the findings. By contrast, the same query on Google Scholar yields 181,000 results.

Patterson, Jones, and their team of researchers and journalists (including a rotating group of HKS work-study students) hope that the site will address the problem of “information overabundance” by vetting contemporary, high-quality studies for harried reporters on deadline.

“Tens of thousands of studies come out every single year,” said John Wihbey, one of three writer/editors for the website. “It becomes very difficult for journalists, journalism professors, and students to go through and find the key items that would help them. We’re trying to be a useful filter and curator.”

The site started in 2008 as a tool for journalism educators and students, and it has its origins in the Carnegie-Knight Initiative on the Future of Journalism Education, a partnership among the Carnegie Corporation of New York, the John S. and James L. Knight Foundation, the Shorenstein Center, and 11 leading journalism schools. (It also contains a wealth of educational resources, including interviews with leading media practitioners and syllabi for reporting courses.) Last year, the Journalist’s Resource team started promoting the site to a wider audience of working journalists.

“Our core constituency is younger journalists, or people who aren’t covering a specialty beat and are doing general assignment work, looking for information on topics they don’t cover every day,” Wihbey said. “It’s the local reporter or news blogger talking about environmental issues in their community, who wants to know what the research says.”

The project currently has 2,300 Twitter followers and 3,500 Facebook “likes,” and the website has drawn 85,000 unique visitors in the past year. The New York Times has incorporated Journalist’s Resource–selected studies into its online topics pages for issues such as income inequality, sex crimes, and social media.

One major news organization that was already working on a similar database for its employees (and which Patterson declined to name) privately approached the Shorenstein Center in the hopes of collaborating, Patterson said.

“It’s very much a niche product, but we’re hoping that over time it will be treated like a fundamental journalistic resource, and a civic resource at that,” Jones said. After all, he added, “Journalism done right is a critical aid to every citizen in helping them navigate the complex world we live in.”