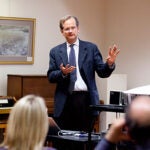 By 2000, Eric Maskin needed a break. Then the Louis Berkman Professor of Economics at Harvard, his days were a blur of graduate student advising, teaching, and committee meetings. Wanting more time to pursue his research, he did the improbable: He left Harvard.

Now, the prodigal economist has returned.

“It’s interesting, coming back to this department, how many of the same people are still here,” Maskin said one afternoon, his spacious Littauer Center office still half-buried under cardboard boxes. “They even look pretty much the same — maybe a little bit grayer.”

Maskin brought back a few gray hairs of his own after more than a decade at the Institute for Advanced Study (IAS) in Princeton, N.J. But when he returned to the department as a professor of economics in January, he was also toting a hefty gold medal — the 2007 Nobel Prize in economics.

Maskin received the honor for a career’s worth of contributions to the field of mechanism design, or as he explains it, “economics in reverse.” Now a staple of game theory economics, mechanism design theory grew in part from Maskin’s work at Harvard, his on-and-off home since his undergraduate days more than 40 years ago.

Instead of starting with a situation and trying to predict the outcome it leads to, market design economists start with the outcome they want and try to create a scenario — the “game” in game theory — that gives rise to that outcome. Unlike the vast majority of economics, which studies markets and world conditions as they are, Maskin and his colleagues explore how markets could be created or tweaked to achieve social goals.

“I get annoyed by the claim that ‘the invisible hand’ — i.e., markets by themselves — will take care of everything,” he said. “We know, from theory, that for very good reasons some markets are not going to work the way we would wish them to,” a statement to which the financial and housing market crashes of recent years attest, he added.

Maskin, who grew up in small-town Alpine, N.J., arrived at Harvard in 1968 to study mathematics. On a whim, he took a course with the legendary economist Kenneth Arrow that covered “a hodgepodge of topics from the frontier of economic theory,” including the nascent field of mechanism design.

“This work was a revelation to me,” Maskin wrote in his Nobel autobiography. “It had the precision, rigor, and sometimes the beauty of pure mathematics and also addressed problems of real social importance — an irresistible combination.”

Maskin stayed on to pursue a doctorate in applied mathematics, a flexible program that allowed him to explore his budding interests in game theory and mechanism design. Arrow, his adviser, urged him on, despite the fact that no textbooks on the subject existed at the time. Maskin completed his Ph.D. in just four years from Harvard’s Graduate School of Arts and Sciences.

After a postdoctoral year in England, he took a job in 1977 at Massachusetts Institute of Technology’s (MIT) economics department, where he taught the first course in game theory, then viewed as something of a fringe topic.

“Within less than 10 years, there was a revolution,” Maskin said. “By the mid-1980s, it was required as part of the core curriculum.”

He left MIT for Harvard in 1985. At both universities, he was known for mentoring students, many of whom became his close collaborators. But after 15 years, the place that once brought vitality to his work had become a drain for him. Maskin left Harvard for IAS, an independent institution that gave him free rein to tackle his research.

The move to Princeton coincided with a once-in-a-lifetime opportunity to buy physicist Albert Einstein’s former home, where Einstein lived from 1936 until his death in 1955. (The property can only be sold to IAS faculty.) On Halloween, Maskin would dress as Einstein, while his wife would carve an E=mc2 pumpkin for the front porch.

Then came the Nobel Prize, which he shared with Roger B. Myerson and the late Leonid Hurwicz. Maskin steadfastly maintains that the honor had little effect on his work or standing within the world of economics, but the prize did bring mechanism design to the broader public.

“The Nobel is a very public thing,” he said. “Having the wider audience has been interesting and worthwhile, but it also makes you think carefully about what you say, because it might end up in the papers.”

The decision to return to Harvard was prompted by a combination of factors — “these things usually are,” Maskin said. He missed the intellectual stimulation of daily interactions with faculty and students. He and his wife wanted to be closer to their 25-year-old disabled son, who recently moved to an assisted-living community in Western Massachusetts. (The couple also has a daughter, a senior at Bryn Mawr College.)

Maskin is eager to reunite with his chamber music group, a rotating lineup of Boston-area economists, with whom he plays clarinet. He’s also hoping to find some suitable squash partners. “I’m a mediocre player, but an enthusiastic one,” he said. During the interview, Ben Friedman, William Joseph Maier Professor of Political Economy and a fellow wallbanger, stuck his head in the door to say hello. “He’s much too good for me,” Maskin lamented after he left.

And, of course, there’s the familiar rush of being back in front of a chalkboard. This semester, Maskin is teaching an undergraduate course in game theory, his first in years.

“I wasn’t sure, when the course started, what was going to happen,” he said. “Was I just going to get up there and do all the talking? But the students are full of things to say.”

It turns out that Harvard still has something to offer a Nobel Prize winner. “I’d been sitting in relative isolation from students at the institute,” Maskin said. “I didn’t realize how much I’d missed that energy.”