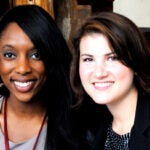 Matthews, Silverman are Scientists of the Year

Daniel Bredar ’14, a resident of Pforzheimer House concentrating in visual and environmental studies with a secondary in history of art and architecture, is awarded a Fellowship to intern at the Brooklyn Museum to work on a series of paintings. Bredar, a recipient of a Sydney Williams Jr. Travelling Fellowship in 2011, was involved with the spring 2012 launch of the student-run Monday Gallery. He plans to pursue a career in the visual arts.

Molly Dektar ’12, an associate of Dudley House concentrating in English with a secondary in visual and environmental studies, is awarded a fellowship to travel to northern Italy to research postwar (World War II) depression for a writing project. Dektar, a recpient of the Charles Edmund Horman prize for Creative Writing (2011) and Cyrilly Abels Short Story Prize (2010), has had work published in The Harvard Advocate and serves on its art and fiction boards. She is also involved in on-campus theater, providing visuals including paintings and photography for shows, and designed the set for “Working: The Musical.” Dektar plans to pursue a career in writing and teaching.

George Fu ’13, a resident of Pforzheimer House concentrating in economics, is awarded a fellowship for attending the Sergei Babayan Piano Academy and the Gijón Piano Festival. Fu has participated in numerous piano competitions and music festivals. His orchestral debut was with the National Symphony Orchestra at the Kennedy Center, and he has since performed with a number of other orchestras including the Montgomery Symphony Orchestra, the Landon Symphonette, and the Baltimore Symphony Orchestra. Currently president of the Harvard College Piano Society, a group that provides resources for pianists on campus by organizing recitals, lessons, master classes, and social events, he plans to pursue a career as a professional musician.

Daniel Giles ’13, a resident of Quincy House concentrating in English, is awarded a fellowship to participate in the International Student Drama Festival (ISDF) in the U.K. Giles will present his own piece “CryHurtFood,” performed in fall 2011 at the Loeb Experimental Theatre, and attend ISDF-sponsored master classes.  Giles also plans to research material for a new work about Mary Shelley, author of “Frankenstein.” His work on “CryHurtFood” garnered him the Phyllis Anderson Prize for Playwriting (2011). Additional theater work includes appearances in a number of on-campus productions including “The Balcony,” “The Flies,” and Sara Kane’s “Cleansed.” Giles plans to pursue work in theater, with a focus on playwriting and directing.

Philip Gillen ’13, a resident of Quincy House concentrating in English with a secondary in dramatic arts, is awarded a fellowship to attend the Collaborative Arts Project 21 (CAP21) Conservatory New York. He has been featured in more than 15 productions at Harvard including “Romeo and Juliet,” “Othello,” “The Rocky Horror Show,” “Parade,” “The Heidi Chronicles,” and “Mr. Marmalade.” Gillen has also produced theater on campus, is a proctor for the Freshman Arts Program, and is involved with Harvard University Television shows “On Harvard Time” and “Ivory Tower.” He plans to pursue a career in acting.

Julia Glenn ’12, a resident of Pforzheimer House enrolled in the Harvard/NEC joint five-year A.B./M.M. program concentrating in linguistics, is awarded a fellowship to participate in violin master classes and chamber music coaching at the 2012 Verbier Festival Academy in Vevey, Switzerland. Glenn is a member and co-concertmaster of the Harvard-Radcliffe Orchestra (HRO), and has also performed with the Brattle Street Chamber Players and Dunster House Opera Orchestra. She is the winner of the 2011 HRO and 2010 Harvard-NEC competitions. Additional appearances include performances with the NEC Philharmonic and Hugh Wolff in Sanders Theatre (2011), and Yo-Yo Ma and the Silk Road Ensemble at Harvard (2010). She plans to pursue a career teaching and performing solo and chamber music internationally.

Keir GoGwilt ’13, a resident of Adams House concentrating in literature, is awarded a fellowship to attend the Bowdoin International Music Festival. GoGwilt also plans to study abroad with professors at the Köln Hochschule and the Guildhall School of Music. Additionally, he will be working with American composer Tobias Picker on a recording. A member of the Brattle Street Chamber Players, he has performed with the Bach Society Orchestra. At Bowdoin he will serve as a Performing Associate Fellow and will also perform with the Bowdoin International Music Festival Orchestra. He hopes to pirsue a career as a concert violinist and be involved in the academic study of performance.

Brooke Griffin ’14, a resident of Lowell House concentrating in visual and environmental studies with a secondary in computer science, is awarded a fellowship to intern at Bent Image Lab, an animation studio in Portland, Ore., known for its production of music videos, short films, and commercials. Griffin will study animation and technical direction for 3-D. On campus she has produced a number of short animation sequences for films and is a freelance graphic designer creating posters, logos, and brochures. She plays French horn in the Harvard-Radcliffe Orchestra, for which she also designs the concert posters. Future plans include working either as a software engineer or studio animator.

Madelynne Hays ’13, a resident of Cabot House concentrating in history of art and architecture, is awarded a fellowship to intern with Broadway scenic designer Derek McLane ’80. Hays has served as a set designer and/or technical designer for more than 26 Harvard productions including “Parade,” “Othello,” and upcoming spring 2012 productions of “Hair,” “Legally Blonde,” “Twelfth Night,” and original student works “The Graveyard Book” and “Cain & Cain.” She plans to pursue a career as a professional scene designer.

Bex Kwan ’14, an associate of Dudley House concentrating in performance studies, is awarded a fellowship to apprentice with Room 404 Media, a pioneer of intermedia in theater, and attend the Urban Bush Women Summer Leadership Institute (UBWSLI). Kwan will be studying projection design in performance with Room 404 Media, and will explore issues of race, identity, and class, and the implications of these topics for artists at UBWSLI attending workshops and classes led by guest artist Liz Lerman, founding artistic director of the Liz Lerman Dance Exchange. Kwan has presented work at Harvard’s Arts@29 Garden and is involved as a projection designer for the upcoming production of “The Graveyard Book” at Farkas Hall. After graduation, Kwan plans to work as an artist in New York City.

Stephanie Newman ’13, a resident of Mather House concentrating in English, is awarded a fellowship to explore acts of human empathy by crafting a memoir from experiences traveling to sites where Jews were hidden during the Holocaust. Newman has had work featured in University publications The Harvard Advocate and The Gamut. In 2010 she was awarded the Joan Gray Untermeyer Poetry Prize by faculty of the English Department for best poem submitted by a female undergraduate. She is the current publisher of The Harvard Advocate and has been a member of the magazine’s poetry board since 2010. Upon graduation Newman plans to continue pursuing her interest in writing.

Georgina Parfitt ’13, a resident of Kirkland House concentrating in English, is awarded a fellowship to attend workshops presented by Blind Summit, a puppetry troupe in London.  Her experience with Blind Summit will inform her as she works to produce a series of short plays. This summer she will also be in attendance at the International Student Drama Festival as a member of the Harvard production “CryHurtFood.” Parfitt has been involved in Harvard theater as an actor, writer, and director. This semester, she is working on an original piece, “The Dragons Are Dead,” in which she uses stream-of-consciousness, poetry, and shadow puppetry. Parfitt plans to be a fiction and stage writer.

Arnold Peinado ’12, a resident of Quincy House concentrating in economics, is awarded a fellowship to study at Dubspot with Daniel Wyatt, a platinum Grammy- and Emmy-nominated mix/mastering engineer. Peinado is currently the co-president of Quad Sound Studios, where he manages and trains student musical engineers and works with clients to produce albums. He has also served as a board editor, business manager, and writer for the Harvard Art Review. In addition to his artistic experience, Peinado interned at Acción Emprendedora, a nonprofit firm dedicated to overcoming poverty through entrepreneurship in Santiago, Chile. Upon graduating he plans on working in the music industry in production and recording.

Jessica Rucinski ’13, a resident of Pforzheimer House concentrating in physics, is awarded a fellowship to attend the Music Academy of the West in Santa Barbara, Calif., as a vocal pianist. She has taken piano lessons from the age of 6 and grew up accompanying and singing in choirs, developing an interest in choral directing. She has been a choral fellow of the Harvard University Choir, a member of the Harvard-Radcliffe Collegium Musicum Chamber Singers, vice president of the Harvard Organ Society, and board member for both the Harvard Early Music Society and the Dunster House Opera Society. She has also served as the assistant music director/chorus master for Harvard Dunster House Opera productions of “The Marriage of Figaro” (2012) and “Die Fledermaus” (2011). Rucinski plans to pursue a career as a vocal coach.

Zachary Sheets ’13, a resident of Pforzheimer House concentrating in music and Romance languages and literatures, is awarded a fellowship to pursue composition study at the Bang on a Can Summer Festival. Sheets is a member of the HRO (co-principal flute and piccolo) and Dunster House Opera Orchestra. He has had compositions performed by the Bach Society Chamber Orchestra and Brattle Street Chamber Players and was the winner of the Bach Society Orchestra’s Composition Competition in 2010 and 2012. He is president of the University Composer’s Association, which recently produced the “New Music Week” at Paine Hall. After postgraduate study at a music conservatory, he plans to become a composer and orchestral flutist.

Abby Sun ’13, a Winthrop House resident concentrating in visual and environmental studies, is awarded a fellowship to create a series of landscape photographs and animated GIFs examining the visual, cultural, and emotional boundaries of the 49th parallel. In January 2010, Sun was the photographer and curator for the “Feminist Portrait Project,” which documented the complex ideologies and identities of students, staff, and faculty who identified as “feminist.” Last fall, she conceptualized and realized the “Faces of Gender Project” in conjunction with the Trans Task Force. She plans to be a photographer and new-media artist with a practice rooted in sociopolitical contexts.

Kevin Sun ’14, a Winthrop House resident concentrating in English, is awarded a fellowship to attend the Banff International Workshop in Jazz and Creative Music. A member of the Harvard Jazz Bands, Sun has participated in numerous OFA Jazz Master in Residence concerts, sharing the stage with jazz legends such as Roy Haynes, Benny Golson, Brian Lynch, and Don Braden, and was featured as composer and performer with the Princeton University Jazz Composers Collective on the CD “Onwards.” His postgraduate plans are to move to New York City to pursue a career as a jazz performer, composer, and educator.

John Randolph Thornton ’14, a Pforzheimer House resident concentrating in history, is awarded a fellowship to write a collection of stories informed and inspired by traveling and studying the American South. He recently had his first novel, “Beautiful Country,” accepted for publication in China. His plans for the future are to become a novelist.