Up by his bootstraps 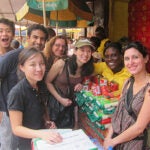 Not your average road trip

A Cambodian writer who survived war is now a Scholar at Risk.

As a child, Tararith Kho spent many nights with his family in a cave dug into a hillside in the Samrong district of Cambodia. “We were under fire,” said Kho simply.

The boy who saw death early grew up to become a poet and short story writer and now a 2011-12 Scholars at Risk fellow at Harvard. Wartime and the continuing tension of Cambodian politics still deeply inform his work. Talk with Rith, as he is called, and you will hear the mantra of a witness: “I have seen this.”

The onetime international writing fellow at Brown University has a literary blog, composes poems and essays in his native Khmer, and has written a dozen stories. One of them, “Red Print,” was about war and took him a decade to finish. “I’m not a political man,” he said recently. “I’m a writer, and I write what I have seen.”

Even as a newborn in 1974, Rith was immersed in war. That was the year before the Khmer Rouge regime established the killing fields, places of execution, starvation, and disease where a third of Cambodians died from 1975 to 1978. After that, civil wars flared and raged until 1991. These templates provided Rith with his childhood memories of firefights and artillery exchanges and the fatal detritus of war. Thousands of landmines are still buried in impoverished Oddar Meanchey Province, where Rith grew up.

This hat-shaped region in northern Cambodia was the Khmer Rouge’s original redoubt. “On the street and in the forest, I witnessed fighting,” said Rith. “Sometimes I saw people die.”

His father was killed in 1975 while fighting the Khmer Rouge. He and his brother grew up with their mother, a primary school teacher and farmer. They lived in a wooden hut roofed with palm leaves, not far from their dugout shelter. They cooked outside over a wood fire, grew vegetables, picked fruit, snared rabbits in the forested Dangrek Mountains, and fished from a nearby stream. There were no books in the house, and newspapers arrived long after they were printed. “We lived in a valley,” Rith said, “and knew nothing.”

By comparison, Harvard for Rith is a paradise of safety and opportunity. “I heard people talk about places like Harvard, Brown, and universities in Europe,” said Rith of his childhood. “But I come from a poor place close to the Thai border. I never dreamed I would come here.”

His fellowship is supported by Harvard Scholars at Risk, a program sustained by contributions from the Office of the Provost and the Scholar Rescue Fund in New York, an arm of the Institute of International Education.

The road to Harvard was long and winding. Despite the chaos of war, Rith managed to attend primary school in his village before moving to high school in Siem Reap province. That was less than three hours away by car, but for him three days away on foot. In 1991, Rith moved to Phnom Penh to take preparatory courses for university. He worked as a builder, housecleaner, and motorcycle taxi driver before entering the Royal University of Phnom Penh on a scholarship.

By 1999, he had a bachelor’s degree, the next year a teaching certificate, and in 2004 a master’s degree in political science from the capital city’s Chamroeun University of Poly-Technology. That same year, Rith married screenwriter Amara Chhaya, whom he had met in a writing class. (Today they have two children, ages 7 and 5.)

In Phnom Penh, writing was one of Rith’s desires; travel was another. He had already crossed many times into Thailand and Vietnam, a country he considers a refuge and second home. But starting in 2006, Rith traveled to France, Sweden, and the United States.

He still dreams of Cambodia, a land where, as one of his poems says, “happiness and suffering live side by side.” Still, he fears returning. His writing is nostalgic but increasingly political. That has earned him the enmity of authorities, whom he accuses of land theft and repression. “This beautiful island is gone,” one of his poems reads.

In history this island was Cambodia.
All generations of Khmer remember.
When the island will return to us
the long suffering will end;
our anger of the many years will be over.
We are waiting for that.

But Rith isn’t just waiting. For years, he has helped students from his remote province get university training through his self-supported Oddar Meanchey Students Association. With assistance from private donors and from Alan Lightman’s the Harpswell Foundation, which is based in Cambridge, Rith provides 30 university students annually with housing, food, books, and computers. Sixteen live in his Phnom Penh apartment; 14 more live in his house there.

Some are aspiring writers. “Read and listen,” Rith tells them. “If we don’t read and don’t listen, we don’t know.”