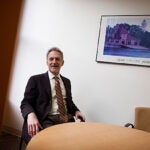 Over Harvard’s history, researchers and physicians have played key roles in vanquishing disease, from testing and distributing the first American smallpox vaccine in 1800, to the breakthrough in the 1940s that led to a polio vaccine, to the myriad advances of today’s broad-ranging medical research.

In just the past few decades, labs on Harvard’s campuses, at its affiliated hospitals, and in research centers have been the birthplace of key findings against disease, from the 1980s characterization of a frightful condition called AIDS, to new ways of fighting cancer by choking off its blood supply, to pioneering stem-cell-based approaches that use a cell’s innermost secrets to attack degenerative ailments.

Harvard’s disease fighters today share the mission of those who preceded them, but they wield weapons that would be foreign to doctors of yesteryear. They use stem cells to create disease-bearing tissues for lab study, advanced imaging equipment to peek inside the body, genetic techniques that probe a cell’s DNA, and vast statistical databases from which researchers pick out rare anomalies and open doors to understanding.

The list of Harvard’s medical and public health advances includes many vital contributions, from the first use of anesthesia at Massachusetts General Hospital in 1846, to the invention of the iron lung in 1927, to the discovery in the 1950s that vitamin A is essential to vision, to the invention of the heart pacemaker in 1952, to the first human organ transplant in 1954, and many others.

“Harvard has certainly been a leading center for research and therapeutic innovation,” said Scott Podolsky, assistant professor of global health and social medicine at Harvard Medical School (HMS) and director of HMS’s Center for the History of Medicine.

After reading Jenner’s account of milkmaids’ immunity acquired by a mild infection with cowpox, Waterhouse sent for a sample. He tested it on his 5-year-old son, Daniel, and then inoculated his family and servants. He became a smallpox vaccination advocate, gaining the ear of President Thomas Jefferson.

In the decades to follow, many ailments stalked the American countryside. One, puerperal fever, killed as many as one in five new mothers in European hospitals. In America, where hospital delivery was rare, deaths would follow doctors as they went from delivery to delivery. Caused by streptococci bacteria, it was carried from patient to patient by physicians’ poor hygiene habits in an era before germ theory became standard.

Boston doctor Oliver Wendell Holmes, who was HMS dean from 1847 to 1853, wasn’t the first to suspect puerperal fever was contagious. But his 1843 pamphlet, “The Contagiousness of Puerperal Fever,” went a long way toward convincing a skeptical medical establishment that it was carried by the physicians themselves.

Podolsky said Holmes is an example of another important Harvard medical contribution: skepticism. Holmes pointed out flaws in how things were done at the time, as did a later skeptic, Maxwell Finland, who regularly debunked ineffective antibiotics.

In 1926, HMS faculty members George Minot and William Murphy tackled another deadly ailment: pernicious anemia, which often killed sufferers within three years. Their study showed that a diet heavy in raw liver improved the sufferers’ condition. Later studies isolated the active ingredient, vitamin B12, that today is given routinely. Minot and Murphy, together with George Whipple, shared the 1934 Nobel Prize in physiology or medicine for the work.

Even as progress was made against other diseases, polio was a stubborn holdout. Polio could cause paralysis just hours after infection, and, if the paralysis involved breathing muscles, death. Because the disease attacked nerve cells, researchers found it difficult to culture in the lab.

In 1948, HMS Professor John Enders, along with colleagues Frederick Robbins and Harvard School of Public Health Professor Thomas Weller, were trying to grow chicken pox virus in a mixture of human embryonic skin and muscle tissue. In a nearby cabinet was a sample of polio virus, which they decided to try in the new culture. The successful result set the stage for the development of polio vaccines by Jonas Salk and Albert Sabin, and netted Enders, Robbins, and Weller the 1954 Nobel Prize in physiology or medicine.

In the early 1980s, the world struggled to understand a mysterious ailment raging through the gay community. In the Harvard lab of Max Essex, researchers were connecting the dots gleaned from his research into feline leukemia, a disease of cats that has startling parallels to human AIDS. Caused by a retrovirus — which carries its genetic information as RNA rather than DNA — feline leukemia often doesn’t cause that actual leukemia but instead suppresses the immune system so other diseases can attack.

Essex, the Lasker Professor of Health Sciences at the Harvard School of Public Health and director of the Harvard School of Public Health AIDS Initiative, was the first, with Robert Gallo, to propose that a retrovirus causes AIDS. His lab contributed several other major findings in AIDS research, including the discovery of GP 120, a protein on the virus’ surface. That finding enabled development of an AIDS screening test, and the protein remains a focus of vaccine research. He also traced the development of HIV in hemophiliacs to HIV-positive blood donors, identified HIV-2, a less virulent strain of the virus mainly found in West Africa, and an HIV analog in other primates called simian immunodeficiency virus, or SIV, which has provided an important laboratory model for how HIV works in the human body.

Today Essex, whose contributions won the 1986 Lasker Award with Gallo and Luc Montagnier, continues to work on AIDS as part of a broader research community that is seeking to understand the human body — healthy and ill — and devise new ways to combat disease.