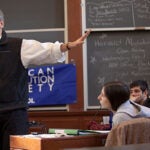 In a conversation that ranged from the recent parliamentary elections to the ongoing sexual abuse of women to a new wave of journalists, panelists at the Feb. 2 Harvard Kennedy School Forum on Egypt expressed both fear and hope for a country still in the midst of a revolution.

“What we’ve got happening in Egypt right now is a transition, a transition from a dictatorship maybe to another dictatorship … maybe to a democracy,” said Tarek Masoud, assistant professor of public policy at Harvard Kennedy School. “In transitions, they are inherently uncertain and you can’t judge them on a minute-by-minute basis. You really have to take a kind of long view.”

Masoud noted that a year after the revolution in Tahrir Square, Egypt is run by the military. “This is not what the people died in Tahrir Square for,” he said.  Additionally, the economy is worsening, and the country’s recent parliamentary election failed to produce a parliament reflective of the people’s ambitions for a more liberal and pluralistic country. Instead, he noted, the new parliament is dominated by Islamists who include not only the Muslim Brotherhood but the new, more radical and conservative Salafis.

“At the same time, ” Masoud said, “it was a freely elected parliament. This is the first time in Egypt’s modern history that you had a parliament that actually represents the will of the Egyptian people. If we compare where we are now to where we were in the dark days of Hosni Mubarak, “there are real reasons for us to be cautiously optimistic.”

Journalist Mona Eltahawy said that Egyptians finally have a chance to say “What we want, to go out and demonstrate when we want, and to acknowledge that these elections were not great, they were not free and fair, they were a mess. But they were our mess, and the next time around they will be a better mess. That’s our hope.”

Eltahawy condemned the gender-based violence against women that is on the rise at all levels of Egyptian society. It began in 2005, she said, with the government’s systematic campaign of sexually assaulting and intimidating female activists and journalists. “When the regime attacks women and holds no one accountable, it sends out a signal that women are fair game. When the street then attacks women and the police stand by and do nothing, that continues,” she said.

A columnist for the Toronto Star, The Jerusalem Report, and the Politiken, Eltahawy said a recent survey conducted by the Egyptian Center for Women’s Rights showed that more than 80 percent of Egyptian women face sexual harassment, groping, and unwanted sexual attention. With casts on both arms as a result of an attack she suffered last fall by security forces, an attack that included sexual assault, Eltahawy said this is a problem the Egyptian people must not hide from.

Charles Sennott, co-founder of GlobalPost, an online news company focusing on international news, and of Global Post’s-Open Hands, an initiative that brought together 16 reporting fellows from Egypt and the United States, noted that Egypt’s young journalists are making an important contribution to the country’s revolution.

“What we found are extraordinary young people who [are] part of this heroic movement,” he said. “I came away so hopeful about this generation of journalists.”

The event, co-sponsored by the Middle East Initiative, the Open Hands Initiative, and the Shorenstein Center on the Press, Politics and Public Policy, was moderated by Tina Brown, editor-in-chief of The Daily Beast and Newsweek.